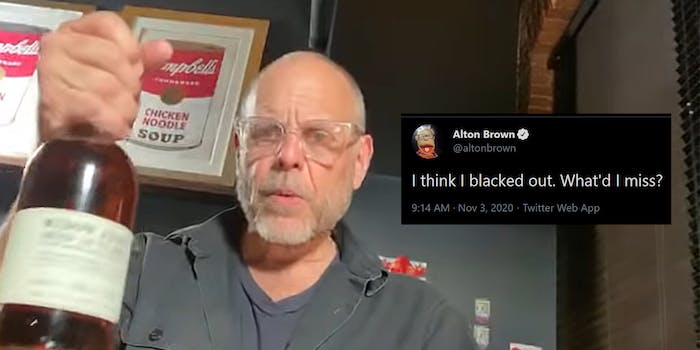 He tweeted through it.

A lot of pent-up energy has been circulating online in the hours leading up to Election Day as we all enter “fuck it” mode, and nobody encapsulated that more on the eve of the presidential election than Alton Brown.

In the past couple of weeks, Brown largely used his Twitter to promote #QuarantineQuitchen, a show that Brown hosts with his wife Elizabeth Ingram on YouTube. But the night before the election, things got rather weird on Brown’s feed.

It started off innocently enough by highlighting one good thing that will survive the election—and potentially democracy itself.

From doughnuts, Brown moved onto Little Debbie, Nutty Bars, and cigarettes. And then it got much weirder.

Over nearly two dozen tweets sent out on Monday night, Brown invoked everything from Spaghettios and Duncan Hines frosting to “MURDER HORNET FONDUE,” an order for us all to “buy Fritos and cat food,” and marshmallow fluff. It was random and chaotic as Brown (who denied that his Twitter was hacked) went and, as they say, tweeted through it. If anything, it echoed Susan Orleans’ drunken Twitter thread from a few months ago.

“I’M MAD AS HELL AND I’M NOT GOING TO TAKE IT ANYMORE,” he tweeted at one point.

When asked why he was mad, Brown responded with “because I’m alive.”

As it played out, people on Twitter were mesmerized by what was transpiring, both wondering if Brown was OK while noting just how much he tapped into our own collective ids on the eve of an election that will have major reverberations for decades. Whether intended or not, it was incredibly relatable.

He capped off his Twitter rant with two different tweets that read “Who’s with me?” before logging off for the night. By Tuesday morning, Ingram assured people that Brown “was just being his average, usual self. You all just normally get the tamed version.”

Brown, meanwhile, took a different approach to address his tweetstorm, which both endeared him more to people and included a massive understatement.