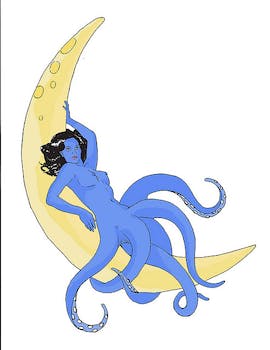 Imagining the Comic Book Guy-style reviews on Yelp for Alien Cathouse—a sci-fi take on the world's oldest profession near Area 51.

Any science fiction fan knows human women set the standard by which sexiness is measured throughout the explored universe. Even giant sentient worms like Jabba the Hutt have the hots for us. And for those who can’t score with a genuine, 100-percent human, any reasonably civilized galaxy offers a variety of sex symbols who look exactly like gorgeous humans wearing colored body paint and rubber-face prosthetics.

That paint and prosthetics will be part of the work uniform at the Alien Cathouse, the world’s first science-fiction-themed brothel, opening in southern Nevada next month. Sex entrepreneur Dennis Hof—the moderately famous star of the HBO reality series “Cathouse”—bought an out-of-business bordello 90 miles outside of Las Vegas, and hired his fiancée, former Hollywood Madam Heidi Fleiss, to design the alien-themed costumes and décor.

The cathouse is also near Area 51, the US military testing facility which, according to various conspiracy theorists, also houses captured alien pilots and spacecraft. So that region of Nevada already enjoys a certain amount of “alien tourism,” in addition to tourists visiting legal casinos or brothels.

Predictably, there has been a lot of sci fi-themed twittering in response to the news.

@Karpfischer also invoked Mr. Spock’s Vulcan heritage when he tweeted, “Pon Farr! I would go to the Alien Cathouse only if they played this music [the Star Trek fight song] all the time.”

(In the Star Trek universe, Pon Farr refers either to Vulcan mating season or the Vulcan pre-sex mating ritual. But the former only happens once every seven years while the latter entails a fight to the death; if the Alien Cathouse caters primarily to Vulcan clients, the business is surely doomed.)

DrMelanieDavis avoided any sci fi references or judgmental tone when she tweeted “Alien Cathouse: A new take on the oldest profession? Just proves there’s something for everyone.”

RussellHobbs420 put it more succinctly: “It’s a whorehouse for nerds! How… cute?”

On Facebook, where comments are not limited to 140 characters, people had more room to riff on the idea of a science-fiction brothel. One woman, who presumably has no intention of visiting the cathouse as a customer or employee, said, “hilarious–I can see the geeks lined up already for a shot with a green chick, or hoping for a Pavel Chekov moment with a ‘Klingette’ who is ‘wery, wery beautiful.’”

While Chris D. at Nerdbastards expressed a similar idea, Robopanda, blogging for Gamma Squad, predicted: “there’s no way this isn’t going to be a patronizing, melancholy affair full of not-to-canon costumes worn by uncomfortable women with c-section scars and childhoods full of dysfunction.”

Woe betide Ms. Fleiss should she screw up any of the details in her costume design; indignant customers won’t even leave the Alien Cathouse grounds before logging on to post irate Comic Book Guy-style reviews on Yelp. I can see it now:

“The real Deanna Troi would never wear her Starfleet rank badges upside-down, and as a half-Betazoid would be far more empathetic toward my attempt to negotiate a 90 percent price discount. Worst. Brothel. Ever.”