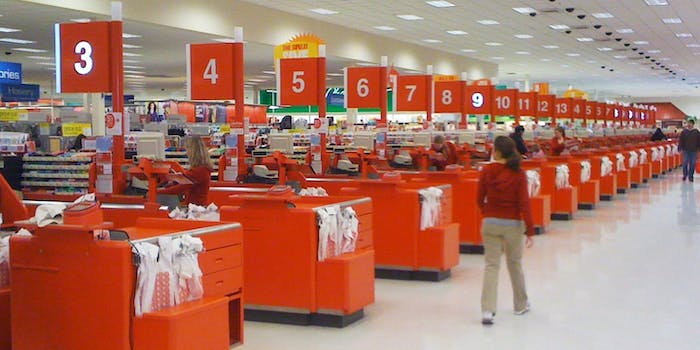 #AlexFromTarget began with a Texas teen on Oct. 26, before Breakr's alleged involvement.

#AlexFromTarget, a hashtag prompted by a viral photo of a teenage Target employee, rocked the Internet on Sunday. Memes surfaced left and right, and media outlets scrambled to cover this new phenomenon. The origins of the photo have been misrepresented in various ways. In the end, it traces back to two teenage girls checking out a hot guy.

Breakr, a marketing company, claimed it was behind the viral hit in a LinkedIn post. However, that was swiftly called into question by @auscalum, the young, U.K.-based Twitter user that it said was part of its team. She says she has no affiliation with the company and that she found the photo on Tumblr and simply shared it with her large Twitter audience.

Breakr also claimed that Alex worked at Target with someone in its network. In actuality, the picture of Alex was first posted Oct. 26, six days before @auscalum shared it, by two 15-year-old Texas girls.

The Daily Dot spoke with Alanna Page, the person who first spotted Alex, over direct message. She says she noticed Alex while passing through his line at checkout and tweeted about it. Brooklyn Reiff, her friend, said she later found herself at Target and remembered Page’s tweets. Reiff then tweeted a reply to Page that included a picture she took of Alex.

“Alanna tweeted about a checkout guy at target being attractive & I soon found myself in his checkout line.. remembering Alanna’s tweet,” Reiff wrote. “I quickly snapped a pic of ‘Alex from Target’ and tweeted Alanna.”

Page and Reiff both say they’ve never heard of Breakr.

“I have never heard of Breakr but a few of my friends are sending me links to the post but I don’t really know what it is,” Reiff added.

Neither girl expected an impromptu snapshot would turn into a trending topic and result in the boy in question getting a spot on The Ellen Show.

“I had no idea anything like this would happen,” wrote Rieff. “It all just happened so suddenly. I was in a Cowboys game and my phone kept blowing up.”

Page has not spoken to Alex or Target since the image went viral. She says neither she or Reiff put the photo on Tumblr, where @auscalum says she found it. There is one possible link in the mystery: Another powerful Twitter user actually posted the picture just before @auscalum, and claims that she found it because the Reiff goes to her school, although The Daily Dot has not been able to confirm.

Apparently there is a company trying to take credit for how the pic taken of me went viral.

My family and I have never heard of this company.