Are we the last generation that will know a free Internet?

Governments all around the world are changing their relationship to the Internet. It's a war of Internet norms.

The Snowden saga continues this week with new revelations about the NSA’s massive digital eavesdropping programs operating around the world. Der Spiegel now claims the NSA is spying on the United Nations, after cracking the organization’s encrypted video conferencing system. If true, this could burn some serious bridges between the US government and longtime allies. Relations were already hurt last month after Snowden’s leaks revealed the that NSA was spying on the embassies of many friendly nations, including France, Germany, South Korea, Turkey, Japan, and India.

But if you are holding your breath anticipating a mass uprising overseas against the United States, don’t. The truth is that while such spying is a clear violation of international law, it is also well within the accepted norms of behavior. And ironically, that very fact speaks volumes about why we need to fight so hard to defend Internet freedom. Because it’s not about laws, and it is all about norms. 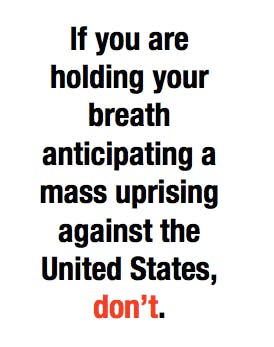 For the first decade of its life the Internet was the wild west. It was a new frontier to explore with almost none of the controls that exist today. It wasn’t some perfect utopia, but it was most definitely free. During that time norms of Internet behavior begun to be established, from a lack of deep packet inspection to net neutrality. These are the norms that prevents Internet providers from throttling video content like Hulu and Netflix that compete with cable TV and in the 1990s let a tiny company called Google compete with technology giants. These are the norms that made the Internet free—for startups, for activists, for everyone. Today, these norms are under siege.

In the Republic of The Gambia, the government is pushing forward with plans to imprison for up to 10 years, along with a $90,000 fine, anyone who criticizes a government official online. In defending the law, which is reportedly particularly focused toward younger citizens, one government minister argued: “If you cannot say anything good about the country, then you should keep quiet.” In Pakistan, YouTube continues to be banned, and the government reportedly blocks 20,000 other websites deemed “objectionable.” India blocks certain blogs in the name of national security, and even threatened to ban Blackberry messages because the service uses encryption.

Iran, though, wins the prize for most extreme approach to controlling the Internet. The west Asia country is building it’s own national net separate from the global Internet infrastructure. The country also has a history of jailing bloggers and others criticizing the government online. But Iran is not the only one: Vietnam, Bahrain, Morocco, Saudi Arabia and a host of other countries continue to imprison bloggers. Brazil went one step further, ordering the arrest of a Google executive in 2012 after YouTube failed to take down a video attacking a candidate for mayor. 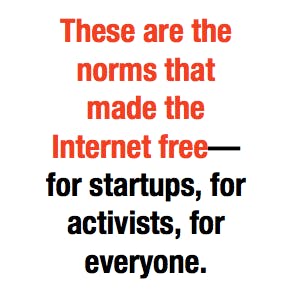 Don’t think you are free online in Western democracies either. South Korea has attempted to block North Korea supportive of North Korea on Facebook. New Zealand reportedly used intelligence from the NSA’s surveillance program designed for national security issues to spy on Kim Dotcom, who is accused of copyright infringement. The United Kingdom, funded by the NSA, runs one of the most advanced communication monitoring centers in the world and continues to edge closer to filtering pornography by default. And then there is the United States—owner of the most advanced digital surveillance systems ever constructed.

The point of highlighting these countries is not to fear monger, but rather to demonstrate that the norms of freedom and equality that the Internet was founded upon are being eroded globally. We are now creating an Internet where governments determine what you see and monitor what you say.

My biggest concern is not, in fact, that one day a global 1984-like totalitarian state will descend upon the world. It’s that our neglect will cause us as a society to lose what makes the Internet great. If we aren’t vigilant, a child born today may not only never experience the invigorating and creative wild west Internet of its early days; they may not even remember an Internet where information was free (as in free speech) and where revealing your identity was a choice.

History has placed us in an unenviable position: we are now forced to decide whether to be Internet’s vanguard, or let a free Internet slip quietly into the past.

Personally, I am up for a fight.