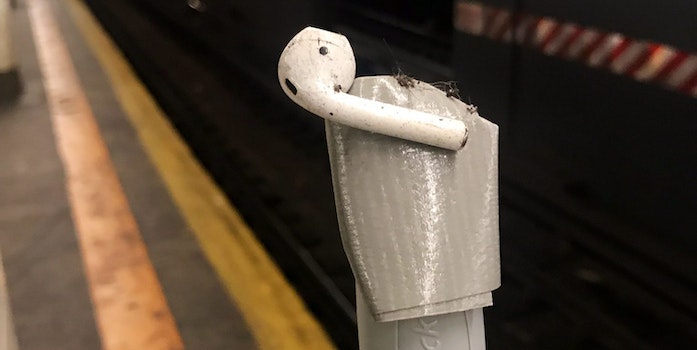 At $69 each, you don't just leave an AirPod sitting on the tracks.

Apple Airpods might be convenient, but they don’t come cheap. A new set with a charging case costs $159, and if you lose or break just one earbud—which is fairly easy to do—it will cost you $69 to replace it.

So you can imagine how upset a woman named Ashley Mayer was when she dropped one of her AirPods near the subway tracks.

While I’m understandably shattered, I’m proud of myself for:

1) Not lunging after it and becoming the first ever AirPod-related subway death.

2) Still going to the gym against all odds and without entertainment!!!

She was right to not go after it. You don’t wanna go messing around on subway tracks. But it must have been frustrating having something so tantalizing close, yet still out of reach—especially when she returned to the same platform the next day to find it still lying there. Apparently, she asked for it to be rescued but it was going to be a whole thing.

That’s when Mayer decided to take matters into her own hands.

(The romaine is for dinner, not rescue.) pic.twitter.com/3iqDCT7UFQ

Using only her wits, a broom and some duct tape (the most American of inventions), Mayer headed back to the subway.

Where, despite a little bit of tension…

He’s filthy but he’s mine (again)!

This is a profile in courage

Even Good Morning America congratulated Mayer on her successful mission.

This AirPod rescue mission is truly something! @dianermacedo has the story. pic.twitter.com/OPcys1WWtz

Although a few people were a little worried about the pod’s cleanliness.

This does not get a fave

Mayer even ran a poll to see if she should place the wayward pod back in her ear.

He’s probably charged. Should I put him in my ear?

I dedicate this selfie to the germaphobes. (You may be onto something, guess we’ll see!)

Don’t worry too much. Mayer insists she thoroughly disinfected the earbud.

She even gave it a name: Righty.

It was certainly a harrowing tale, full of drama and suspense, and luckily one with a happy ending.

But it’s important to remember that not everyone is as lucky and clever as Ashley Mayer. What of all the poor people who lose an AirPod every day?

Well, one man has come up with a revolutionary idea that could forever eliminate this plague upon audiophiles. It seems crazy at first but just hear him out.

imagine if it was connect to some sort of cord, where if this happened, it would fall delicately to your waist.