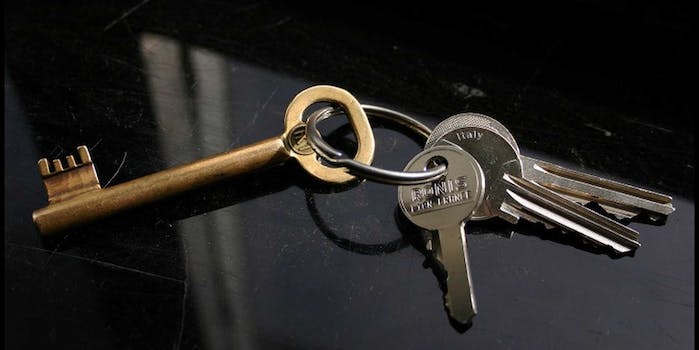 The Airbnb squatter appears to have identified himself... on what is likely a Kickstarter scam.

After raising some eyebrows over on Kickstarter this weekend, the Airbnb squatters are under siege. A good old fashioned doxxing by victims reveals that “Maksym Pashanin” is likely a scam artist who blew his own cover.

Last week the man who calls himself Maksym Pashanin claimed squatter’s rights and refused to leave the pad he rented with his brother for 30 days in Palm Springs, Calif. Then Pashanin threatened to sue the homeowner, Cory Tschogl, for blackmail and negligence.

In a bold statement, Pashanin claimed the house’s water had damaged his espresso machine and made his brother sick. Then he warned Tschogl not to turn the electricity off, since he was using the squatted condo to earn thousands of dollars as a computer game designer.

When a court official tried to serve Pashanin with papers, a man with his face covered and surrounded by reporters emerged in the front yard, and claimed to be Maksym’s brother Denys. The state’s attempts to get the tenants into court were thwarted, since no one is sure of the masked interloper’s identity.

Homeless and facing the massive bills it would take to haul the squatters before a judge, Tschogl complained that Airbnb had been slow to respond to her “horror story.” The company issued an apology, paid the missing rent, and vowed to help with legal costs. Aside from being slow to help, Airbnb’s reputation has suffered because Pashanin was one of the site’s verified users, and had therefore undergone the company’s supposedly rigorous security checks.

This weekend, Pashanin revealed more about his scam. In a message posted on the Kickstarter page for a video game he created called Confederate Express, he wrote:

The scam artists has managed to enrage the Kickstarter community as well. Confederate Express’s backers are furious that after pocketing $39,739 for the game, due in June 2014, Pashanin has only offered excuses. After sending messages earlier in the year apologizing for delays, and pointing them to another Kickstarter for a game called Knuckle Club (the existence of which can’t be verified), the supporters believe they, too, are victims of a scam.

“Holy shit, I simply cannot BELIEVE this entire story is a thing that happened,” said backer  Pedro Rosário Silva. Never in my life have I felt so betrayed and ashamed of having given money to someone. I hope you receive legal retribution over everything you have done and I want my fucking money back. Go fuck yourself.”

One Kickstarter users, Ted ‘Reso’ Yu, has aggressively gone after the company in public records searches and posted his findings on the Kickstarter comments. The seemingly venerable profiles of the Kilobite team don’t match up against background checks, and what exists of Confederate Express looks like it’s been plagiarized from another project called Sprite Lamp.

That may also include the creator, whose name, points out Kickstarter user Chris Maser, is the backwards spelling of “My skam.”

As PegasusOrgans chipped in, there also appears to be a hidden clue in the name of the game, Confederate Express, which has “Con” in the title. More precisely, “Ex con.”