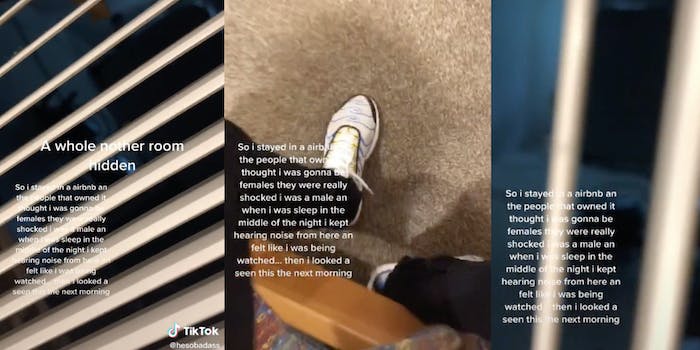 The TikToker explains that the people who owned the Airbnb 'thought [he] was going to be female.'

An Airbnb guest’s TikTok video is giving people the heebie-jeebies after he claims to have found a hidden room behind an air vent in his accommodation.

The TikTok user, @hebobadass, explains in the video that the people who owned the Airbnb “thought [he] was going to be female” and that they were surprised when he arrived on the property and found out he was male.

The guest explains that during his stay, he heard noises coming from the vent in the middle of the night while he was trying to sleep. He also says he felt like was “being watched,” so he follows the noise to investigate.

As he approaches the vent and looks closely through the slats on its cover, the TikToker finds that the “vent” was actually disguising a hole into a room beyond.

Holding his camera to the “vent,” the TikToker wrote: “A whole nother room hidden.”

The video has been viewed 1.6 million times since being posted on Friday.

Although there’s no evidence the TikToker was actually being watched, or that anyone had been in the room, the revelation was enough to set the user and his viewers on edge. “Y’all be careful out here!” he warns his followers.

“You just gave me the creeps,” one said, with another urging him to “please post that Airbnb so no one will go to it.”

He added in the comments that he didn’t hear anything until the middle of the night. “I was asleep and it was dark,” he wrote. “I thought I was just hearing things until I looked the next morning.”