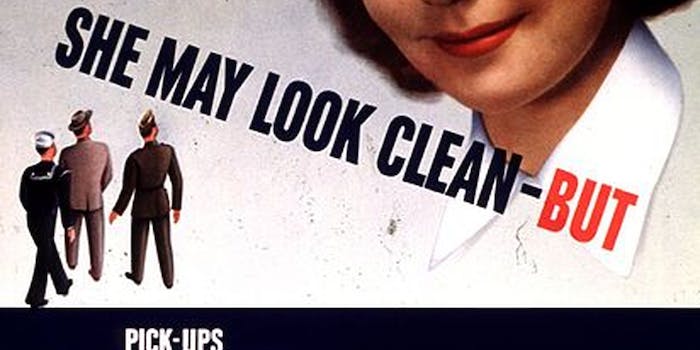 Air Force warns its members of the risks of sextortion scams

Military members may be more targeted because of their access to information.

“She may look clean,” the PSA reads. “But pick-ups, ‘good time’ girls and prostitutes spread syphilis and gonorrhea. You can’t beat the Axis if you get VD.”

But nowadays, the U.S. Air Force is warning its enlistees of a new kind of sexual danger—one you can’t undo with penicillin.

As first reported by Wired, last month, the Air Force saw fit to issue a pamphlet to its members alerting them to the “new” online scam of “sextortion.” Officials claim the military’s rigid code of conduct, as well as its members’ access to sensitive security information, make them prime targets for online scammers.

Sextortion (a combination of “sex” and “extortion” that is hopefully on the Oxford English Dictionary’s shortlist for Word of the Year), is defined by the Air Force as the “act of using sexual images (obtained through either enticement or malicious code) in order to extort money from unsuspecting victims.”

“Reporting across military services indicates that DoD personnel have been subjected mainly to webcam sextortion scams. DoD personnel were enticed to engage in online sexual activities which were secretly recorded; money was then extorted from the victims in order to prevent the release of compromising video material.”

The study cites a report from the Naval Criminal Investigative Service (not the one with Mark Harmon), which found this type of scam was successfully perpetrated against at least four sailors in 2012. A separate investigation by the Army unearthed three recent instances in which its members were victimized. But many more service members are being targeted. In November 2012, Facebook’s security team broke up a sextortion ring in the Philippines that included 21 employees of the company MoneyMaker Portal Web Solutions, which targeted hundreds of U.S. Army and Navy members for more than a year.

Air Force officials haven’t determined whether the attacks have been specifically targeted at military members or just the general public. However, they do warn that the code of conduct servicemen and women are expected to meet, as well as their access to information, make them particularly vulnerable.

It may seem silly for the Air Force to warn its members about the dangers of online sexual extortion scams, but it goes along with the military’s increasing focus on shoring up cybersecurity. Recently, the DoD created 13 squads dedicated to defending against cyber attacks and President Barack Obama signed an executive order strengthening online security.

Maybe soon a new kind of poster will start popping up on military bases: “She may seem into you … but sexters, catfishers, and ‘cyber sex’ buddies mean extortion and computer viruses. You can’t fly virtual missions if you contract virtual-VD.”