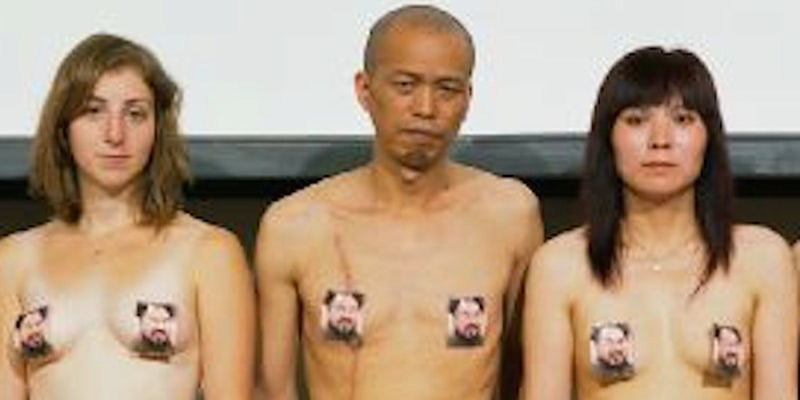 Fans of Ai Weiwei, a dissident artist, are sharing nude photos of themselves to protest government censorship.

A week after 20-year-old Egyptian Aliaa Elmahdy stirred up controversy in the Arab world by baring it all on her blog, dozens of Chinese netizens have posted nude photographs of themselves to support a dissident artist and his assistant, who stand accused of spreading pornography.

The artist, Ai Weiwei, announced last Friday that Chinese police have begun investigating videographer Zhao Zhao for a photograph titled One Tiger, Eight Breasts (The image is not safe for workplaces which match Chinese government censors in their prudishness.) The picture shows Ai Weiwei sitting with four women, all of whom are nude. Zhao published the photograph last year.

Pornography is illegal in China and its distribution is punishable by up to two years in prison, though the definition of what constitutes pornography is, unsurprisingly, vague.

The blog Ai Weiwei Fans’ Nudity is collecting many of the photographs posted from around the Chinese Web. “Listen, Chinese Government: Nudity is not Pornography,” the blog reads, under which sits a photograph of a cherubic, floating baby—naked except for a blue baby float wrapped around his neck.

A naked baby certainly won’t offend even the most priggish of government bureaucrats, the blog’s creators seem to be saying. So how can there be anything wrong with the images of naked women and men on the pages below?

“If they see nudity as pornography, then China is still in the Qing dynasty,” Ai said, according to the Washington Post.

And that’s not really the point. As the netizens who are posting nude photographs are proving, the move against Ai likely has very little to do with bare genitalia. It’s an attempt to silence the artist.

Ai was detained in April 2011 on tax-evasion charges as the Chinese government cracked down on dissidents throughout the country in response to the Arab Spring.

One apparent cause of that arrest was another nude photo, this one of Ai with nothing but a toy alpaca covering his crotch. The Chinese caption reads “grass mud horse covering the middle.” The Chinese language is full of homonyms which differ only subtly in their tones; change the tones, and that phrase means “fuck your mother, the Communist Party Central Committee.”

The government released Ai in June, though he has continued to spar with authorities over the tax charges.

Indeed, Ai Weiwei has been a constant thorn in the government’s side, particularly after the 2008 Sichuan earthquake. Thousands of children were killed in that quake when their schools collapsed. Many blamed the building collapses on “tofu” construction projects—buildings made cheaply due to government graft and corruption.

Ai worked with another artist shortly after the quake, compiling a list of 5,385 names of children killed in the quake. He then tweeted the name of any child whose birthday fell on a given date, in a morbid and moving memorial that came every day, 365 days a year.

That, we’re guessing, is far more offensive than any nude photograph.