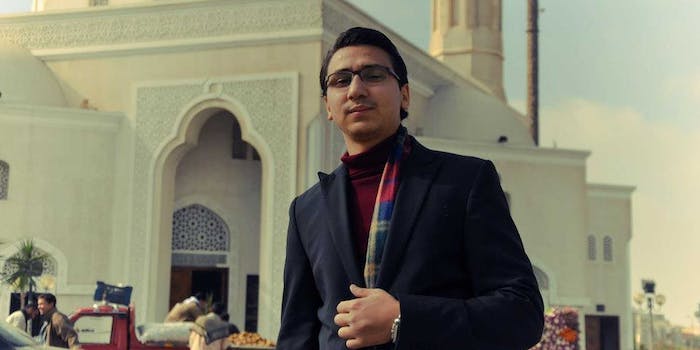 In Cairo turmoil, a videographer captured his own death on camera

Ahmed Samir Assem, a 26-year-old videographer for Egypt's Al-Horia Wa Al-Adala, appears to have documented his own death in an unnerving video.

When Ahmed Samir Assem, a 26-year-old videographer for Egypt’s Al-Horia Wa Al-Adala newspaper took to the streets of Cairo Monday to document protests outside of the Republican Guard building, he probably wanted to give people a sense of what it was like to be on the ground amidst the country’s continuing revolutionary turmoil.

He probably had no idea just how vivid and graphic his video would end up being.

Assem appears to have documented his own death, in an unnerving video that is spreading out across the Internet.

The photojournalist was on assignment Monday, covering a gathering of supporters of the recently ousted President Mohamed Morsi. The protesters gathered outside the headquarters of Egypt’s Republican Guard, where the military was believed to be holding the recently deposed president.

There are conflicting reports about what happened next, whether pro-Morsi supporters began storming the building or whether the guards simply chose to open fire unprovoked. What is know is that shooting by Egyptian military members did begin.

Assem’s video captures one of the soldiers on a rooftop firing toward the crowd. The soldier gets off several shots before turning his gun directly at the camera and firing. At that point, the video abruptly ends.

The context of the video was confirmed by Assem’s colleagues, who spoke to the Telegraph:

“At around 6 a.m., a man came into the media centre with a camera covered in blood and told us that one of our colleagues had been injured,’ said Ahmed Abu Zeid, the culture editor of Mr Assem’s newspaper, who was working from a facility set up next to the Rabaa al-Adawiya mosque, about a mile away.

“Around an hour later, I received news that Ahmed had been shot by a sniper in the forehead while filming or taking pictures on top of the buildings around the incident.”

Assem was one of 51 people killed by security forces during Monday’s unrest.

The Telegraph could not obtain a physical copy of the recording and said it thus could not independently verify the “provenance” of the recording. Commenters on a YouTube posting of the clip also cast aspersions. But Assem’s brother said the clip is genuine, that it comes at the end of a full 20 minutes of video that Assem clearly shot outside of the Republican Guard building Monday.

Already, the video is being used by the Muslim Brotherhood, backers of former President Morsi, who are using it to drum up anti-military sentiment among the Egyptian populace.