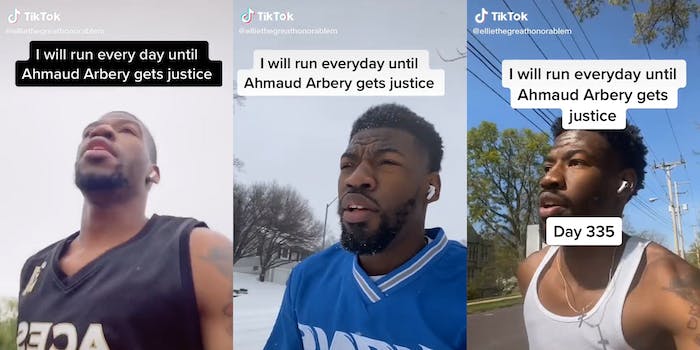 This TikToker is running every day until Ahmaud Arbery gets justice

One year on, this TikToker is keeping the #IRunWithMaud protest alive.

More than a year after the death of Ahmaud Arbery, a TikToker is still running every day to raise awareness of his case.

Arbery was shot on February 23, 2020; an unarmed Black man who was targeted by three white men while jogging in Brunswick, Georgia. The resulting police investigation became a national scandal after the Glynn County Police Department took more than two months to make an arrest—and only did so after a video of Arbery’s death went viral online. In May 2020, people began to draw attention to the case using the #IRunWithMaud hashtag, referring to the fact that Arbery was attacked while jogging. And one year later, Tiktoker @elliethegreathonorablem is still going strong.

Three men were eventually charged with Arbery’s murder: Gregory McMichael, his son Travis McMichael, and William Bryan. They each pleaded not guilty, claiming that they were attempting to make a citizens’ arrest, and believed Arbery was responsible for a string of break-ins in the neighborhood. However, this didn’t correspond to any real crimes in the area, lending further credence to the idea that this was a racially motivated attack. The court case is still ongoing.

@elliethegreathonorablem’s TikTok protest is simple and to-the-point. Each day there’s a new video, and each video is labeled with the same message: “I will run everyday until Ahmaud Arbery gets justice.”