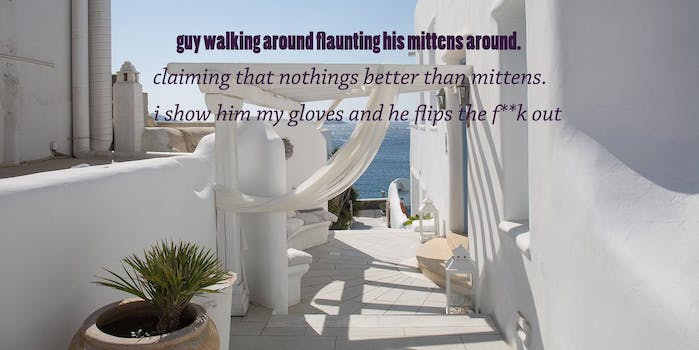 Weird Twitter king @dril has a new parody account, and its mix of dril tweets with calming images is perfect.

If you’re not yet aware of dril, the anonymous author (or even authors) first tweeted in September 2008 with a simple “No.” The account then quickly gained popularity throughout the Twitterverse for its poignant views on life, which can often be nonsensical or have spelling mistakes. It’s all part of the charm.

Perfecting the parody, the account’s description reads, “dril’s tweets, but for your home or office. A dril you can bring home to your parents on Thanksgiving.”

Aesthetic Dril has yet to gain explosive popularity like the original account, with under 800 followers so far compared to Dril’s over 350,000. But, for all we know, the bot could be run by the same person or people as the original, making it only a matter of time before it hits the mainstream.

Now, here are some of our favorites out of the almost 400 tweets from the Aesthetic Dril account.