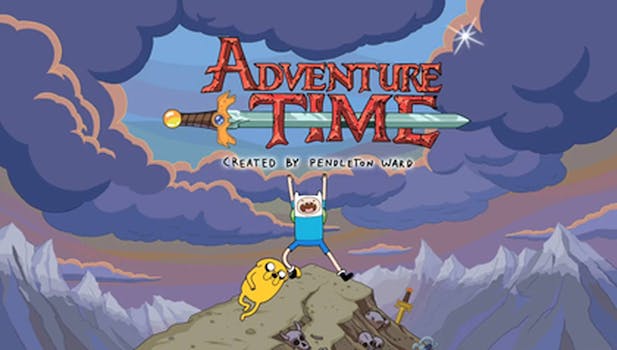 Violence can be used for good—and that’s mathematical.

Violence doesn’t solve anything. It’s a little piece of wisdom adults have told kids for years. But while parents preach non-violence and point to the lives of Martin Luther King Jr., and Ghandi, children’s television has been teaching a different lesson.

For decades a brutal cavalcade of kid’s cartoons from Looney Tunes to GI Joe has carried one implicit lesson: Might makes right. Bugs Bunny and the Roadrunner are smarter than Elmer Fudd and Wile E. Coyote, but that doesn’t mean they aren’t above physically punishing the predators.

Cartoons from a few decades ago danced around the issue. Fudd and Wile E. Coyote always returned to harass Bugs and the Roadrunner. The soldiers of G.I. Joe: A Real American Hero shot Cobra’s soldiers with laser blasters rather than bullets, yet the show went to great pains to show that no one actually died from getting shot.

Not so in Cartoon Network’s mega-hit Adventure Time.

The animated show tells the story of heroes Jake the Dog and Finn the Human. The pair conquer challenges, rescue princesses, and fight monsters in the name of righteousness. Unlike older cartoons, characters die. Finn cuts beasts in half to reveal squishy innards. Violence is a powerful problem solver and the heroes enjoy it.

Violence can be good. And this can be a good lesson for kids (and the show’s many adult viewers) to learn.

To understand why Finn and Jake enjoy violence so much, it helps to understand the world of Adventure Time. Despite focusing on the themes of childhood, fun, and innocence, the show presents a post-apocalyptic world. The Land of Ooo stands in the ashes of a world like our own. The Great Mushroom War, implied to have been fought with nuclear weapons, occurred one thousand years before the start of the show. Dozens of episodes across every season include examples of abandoned possessions from the previous society, even weapons.

This is a world born out of violence. It makes sense for the protagonists to rely on it. For them, violence is a way of saving a universe that destroyed itself through war.

The series’ ideal of violence becomes clear by the tenth episode, “Memories of Boom Boom Mountain,” when Finn and Jake hear the eponymous mountain crying because of their roughhousing with a bunch of vikings. After the two fail to convince the rock formation that “a smooth, well-controlled roughhouse bolsters the guts and rejuvenates the muscle,” Finn and Jake just move the mountain in another direction and claim they’ve stopped fighting. In other words, the violence continues literally behind the mountain’s back, and Finn and Jake just lie about it.

In an episode towards the end of the first season, “Finn Meets His Hero,” the heroes defeat pacisim as an ideology. Finn and Jake encounter their idol Billy, a former monster-killing adventurer who’s now a washed-up pacifist living in a cave. Billy spent his whole life fighting monsters, but the beats never stopped coming. There was always another monster waiting to kill people and it beat him down. Billy encourages the pair to save their friends “non-violently. Help people by being active in your community.”

Finn tries, but he’s terrible at it and ends up doing more harm than good. “Apparently I suck at being nonviolent,” he concludes. Then he and Jake convince Billy that only violence can solve the toughest of problems. They bring an old woman they’d just rescued from a swamp monster as proof. “I saved her using violence,” Finn announces.  “And that’s not a bad thing.”

In a season 3 episode called “Conquest of Cuteness,” Finn and Jake run into a minuscule candy king hell-bent on killing them in combat to prove his worth. He leads his equally tiny people to a brutal battle against beings hundreds of times larger because he wants to dominate and control people. Finn gets his friends to play along with the little king, pretending he has killed them until he finally goes away.

The scheme doesn’t work, but here’s the message: Fighting random people is an acceptable way to establish authority and improve your self-esteem.

In the next episode, Finn and Jake come across the Fight King in “Morituri Te Salutamus.” He forces the two to battle a variety of gladiator ghosts, all whom the Fight King deceived into killing each other. It sounds like the setup for an anti-violence message. But this is Adventure Time.

Finn deceives Jake into thinking he has gone mad with bloodlust and joined forces with the Fight King only to destroy the Fight King at the last minute. Finn plays along with his enemy’s violent games to trick him into a false sense of security, using violence as a psychological tool as well as a physical one.

One of Adventure Time’s stranger episodes has to be “Dentist.” Finn must make a deal with a militia of tooth-fixing ants: They’ll take care of his rotten tooth if he and his enemy Tiffany work together to fight a horde of worms. War against the worms strengthens the bonds between Tiffany and Finn. The two old foes bury the hatchet and prove that blood is thicker than water. In this post-apocalyptic, war-ravaged universe, even a toothache requires violence to fix, and it can even be a source of friendship.

On the surface, Adventure Time is the kind of stuff angry parents’ groups have ranted against for years: Mindless violence without consequences.

But that sells the brilliant show short. Adventure Time’s writers tell stories where righteous violence rights the wrongs of society even if it’s not in self-defense. This isn’t a culturally or politically sensitive argument for the generation of kids who grew up with the wars in Afghanistan and Iraq, but it’s a brave challenge to the status quo.

Violence isn’t all bad and, at least in Adventure Time’s universe, the heroes fight for good.

Matthew Gault is a contributing editor for War Is Boring. He produces and co-hosts War College, Reuters’ military podcast.

Austin Bodetti is a Boston-based war reporter. He’s written about his travels to conflict zones in Southeast Asia for War Is Boring and The Daily Beast.