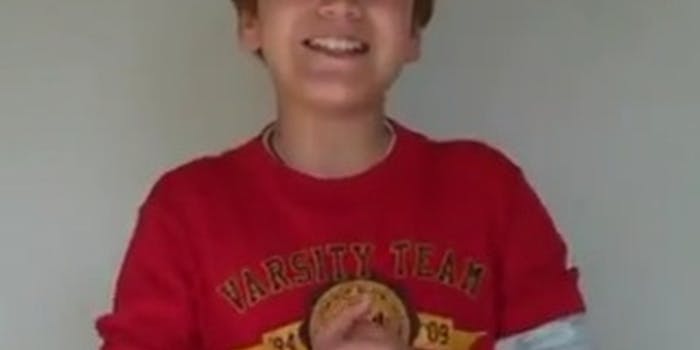 Advanced UAV beats YouTube haters at their own game

The 13-year-old gaming prodigy has amassed roughly 10,000 subscribers for his commentary on the Call of Duty series.

There’s a grand irony to Advanced UAV’s YouTube success: He’s technically too young to be playing the game he comments on.

At age 13, Advanced UAV is the youngest contributor to Machinima, an entertainment network specializing in video game content. He’s a YouTube novelty, with roughly 10,000 subscribers on YouTube and nearly 1 million views to date.

But his success has come with a steep price. It’s his plentiful haters who fuel his view counts.

Since joining Machinima in Jan. 2012, he’s been bullied on a daily basis, enduring insults about his red hair, looks, voice, age, and video-game skills. Worst of all, he regularly gets death threats on his videos.

“I want﻿ to punch you in the back of the fuckin head” Scottyarms81 wrote on Advanced UAV’s latest video on June 5. Scottyarms81 lists his age as 31 on YouTube.

“Your mom should have gotten an abortion 13﻿ years ago,” madeforcod1, a 21-year-old, commented on Advanced UAV video’s titled “Its My Birthday!”

Part of the problem lies in Advanced UAV’s chosen game, the maturely rated Call of Duty series. His detractors—primarily grown men and older teenagers—use the game’s age restriction to justify their online harassment.

Besides barraging Advanced UAV’s videos with hurtful comments and dislikes, some have mass-flagged his videos as offensive or spam in order to get them removed from the site. Others have also uploaded parody videos and rants mocking the tween’s voice.

In “An Open Letter to Advanced UAV,” which has been viewed over 30,000 times, 19-year-old Obviously Jesus rants for nearly eight minutes about the then-12-year-old gamer. Obviously Jesus, who has since had his Machinima partnership revoked, calls Advanced UAV’s voice “infuriating” and tries to discourage him from making videos by calling him “blind”  to his own “unoriginality.”

The Call of Duty commentating scene on YouTube isn’t always a lopsided battlefield. Some male gamers have come forward to chide the community for its immature actions.

GoldGloveTV says in his video, “Regarding the Hate on Advanced UAV,” he is “frustrated” by the
community’s reaction and how “every single comment was just bashing this kid for doing what he enjoys.”

“It’s sad to see so many people belittle and attack a 12 year old,” GoldGloveTV wrote in the video’s description. “You guys need to seriously get your shit together and worry more about yourselves.”

In his video, “Call of Duty 4 – My Thoughts on the Advanced UAV Situation,” EnigmaXx730 adds, “I don’t understand how people can sit here and try to put down a kid with a dream or a goal.”

For the most part, Advanced UAV seems to have taken the hate in stride. The overwhelmingly negative responses prompted him to make an April Fool’s video, titled “I Quit,” which to date is still his most-viewed clip.

Like controversial reply girl Alejandra Gaitan, Advanced UAV seems to have found that haters make the most-loyal viewers. And all the dislikes and negative comments? Well, those actually increase his videos’ rankings, since YouTube counts those as legitimate feedback.

With the income he is generating, which he’s admitted isn’t a lot, Advanced UAV said in a YouTube post that he’s saving it all for college and for a “really great car.”

It seems the old adage holds true on YouTube: Even bad publicity is good publicity.

“We don’t comment on, or get involved with [our channel partners] personal lives,” an unnamed Machinima representative, who is aware of the negativity surrounding its youngest partner, told the Daily Dot. “But we can say, Advanced UAV has informed us he doesn’t mind the feedback he gets and enjoys his popularity.”

In the age of cyberbullying, it’s refreshing to see Advanced UAV stand so strong amidst the negativity.