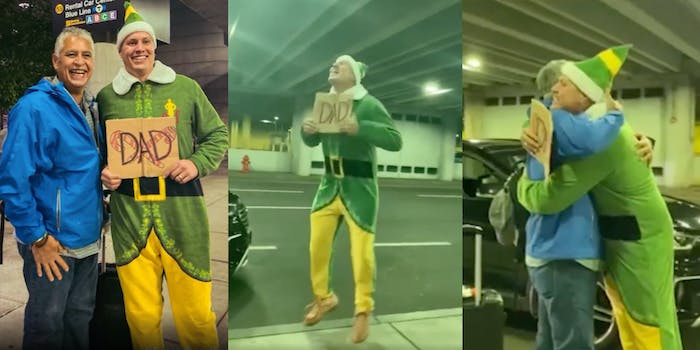 Man dresses up as Buddy the Elf to meet biological dad, serenades him with the movie’s awkward song

His father never saw the iconic Christmas movie, so he was understandably a bit confused.

Meeting a biological parent as an adoptee can be nerve-racking, but one man’s attempt to lighten the situation is going viral for being both clever and sweetly awkward.

Fourty-three-year-old Doug Henning went all out to greet his father for the first time when he flew to visit Doug in Boston, Massachusetts, over Thanksgiving. In fact, he drew inspiration from a film in which another adult adoptee meets a father who initially never knew he existed—Elf.

In Elf, Buddy (played by Will Ferrell), goes to New York City to track down his father. He finds him at work, but his father mistakes him for a singing Christmas telegram, prompting an excited Buddy to make up a song on the spot explaining who exactly he is.

To greet his own father, Doug not only dressed up as Buddy the Elf, but performed the whole awkward and overly enthusiastic adoption exposition song as well.

To make the whole thing even more awkward, Doug’s father, Raul, had never seen the iconic Christmas movie and likely had no idea why his long-lost adult son was jumping around in an elf costume singing his heart out.

The whole thing was captured on video and posted to social media.

“When he came out of the airport, he probably thought I was a lunatic,” Doug told Boston.com. “It was a really good way to break the ice.”

But if he was thrown by the gesture, Raul hid it well.

Doug was put up for adoption as an infant by his biological mother, and Raul never even knew he had a son until Doug discovered a biological cousin through Ancestry.com.

From there, the cousin helped Doug get in touch with his biological sister, as well as Raul earlier in 2020. Their ability to meet in person was hampered by the pandemic, but after spending time talking on Zoom throughout 2020, Doug’s family and Raul were all able to get coronavirus tests and finally meet face-to-face.

And one of the first things they did? Introduce Raul to the world of Buddy the Elf, of course.

“We ultimately sat down as a family and watched the movie,” Doug said.