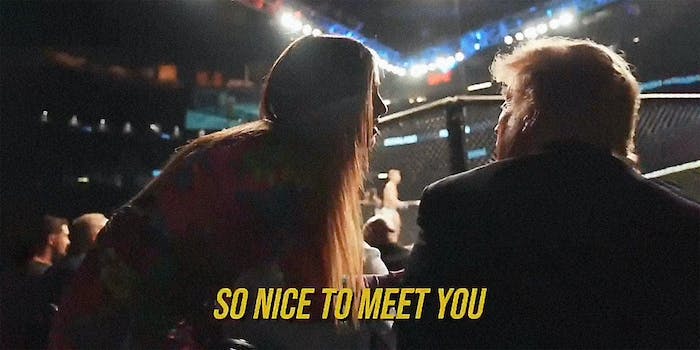 TikTok star Addison Rae is again receiving criticism for what happened in Vegas.

“Addison Rae exposed,” says one of the Nelk Boys, as another adds, “Trump’s gonna fuck her, easy.”

In a longer YouTube video, crudely titled “Donald Trump is Smashing Addison Rae,” Trump is introduced to the Nelk Boys. Steve Deleonardis, known as SteveWillDoIt, says, “Great to meet you.” His Instagram profile photo is now a photo with Trump from that night, and Nelk Boys tweeted about having a “great conversation with the next president of the United States.”

Last summer, Rae, 20, addressed rumors that she was a Trump supporter after a fake voting record circulated. Rae said then that she wasn’t even registered to vote, but in the lead-up to the election, she reminded her followers to get registered.

“Steals from black creators and coddles white supremacists? are we really surprised?” said one commenter, referencing the backlash to a segment on The Tonight Show in which Rae performed TikTok dances by Black creators, without giving credit.

This is the same UFC fight where Rae took photos on the red carpet pretending to be a reporter and tweeted, “I studied broadcast journalism in college for 3 whole months to prepare for this moment,” which also drew backlash. She later tweeted, “nvm y’all got me fired.”

Rae has not yet commented on the video.