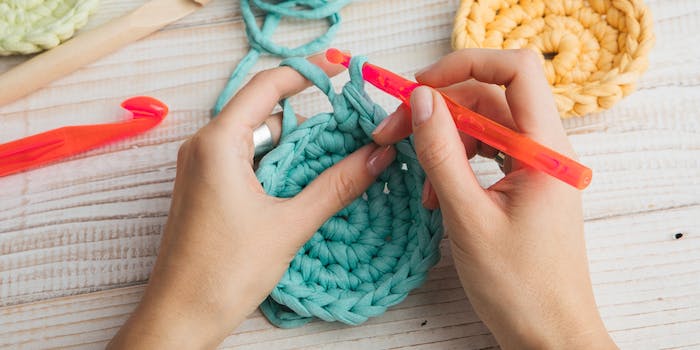 ‘Have you ever burned plastic to your skin?’: Crochet TikTokers warn people against making potholders with acrylic yarn

It's a matter of safety.

Crochet TikTok has become immensely popular during the pandemic. Many find the craft to be a stress-reliever, bite-sized tutorials have allowed newbies to start crocheting, and there can be something soothing to watch someone bring an item to life (whether in real-time or via timelapse) in a matter of seconds. But over the past week or so, crochet TikTok has been up in arms over a crocheter who made a video showcasing a bunch of potholders made with acrylic yarn.

For many knitters and crocheters, the choice of whether to use acrylic yarn or natural fibers for projects usually boils down to a number of factors like accessibility, cost, or personal preference. (Acrylic yarn is cheaper and more widely available in craft stores like Michael’s and Joanne’s Fabrics, but it can be harmful to the environment; natural fibers like wool, alpaca, cotton, and linen, can be cost-prohibitive but they tend to last longer and are more environmentally friendly.) For many garments and crafted items, the best yarn for a project is whichever one you make it with paired with proper care.

But as many crochet TikTokers are pointing out this week, sometimes there are exceptions to that rule—and which yarn you make an item with could make the difference between safely handling hot items and getting burned with plastic.

According to TikToker @dxvotie, a crocheter on TikTok was selling potholders made of acrylic yarn, and when people pointed out that you shouldn’t be using acrylic yarn for potholders, the woman responded by saying that she was being bullied—and blocking anyone who pointed it out. (The crocheter has since deleted her account.)

Other TikTokers posted videos detailing the controversy playing out on crochet TikTok. But they also wanted to stress that people shouldn’t use crocheted potholders made with acrylic yarn because it’s an actual safety issue and they wanted to stop the spread of yarn misinformation.

One commenter highlighted that part of the defensiveness might have been from yarn elitism and how some crafters are looked down on or judged because they use cost-efficient acrylic yarn versus more expensive yarn made from natural fibers.

@gwendyhook also pointed to sweaters as another item to be careful with because if a sweater is made from acrylic yarn, it shouldn’t be put in the dryer and can melt.

Acrylic yarn is made from polymers such as acrylonitrile, which contains plastic. (According to the Federal Trade Commission, the fiber has to contain at least 85% acrylonitrile materials to be called acrylic.) Acrylic yarn can melt after handling things that have been on a stove or in an oven, and if you’re holding an acrylic potholder, that melted yarn could potentially burn you.

Crocheters have long suggested that potholders should be made from cotton or wool because those materials can withstand heat.

It also led to several TikTokers demonstrating just what happens when acrylic is exposed to heat. Some of the demonstrations are on the sillier side—@crochetdragon throws acrylic yarn onto an electric stove and fries it, @homemadebykellym puts a small square swatch made from cotton and acrylic yarn into a castiron pan—but the end result is the same: When exposed to heat, the yarn melts.

Angie Henson took a different approach. She placed several strands of yarn with varying degrees of synthetic material and lit each of them on fire to show how each type of yarn reacts to flames.

“Do you see how it’s curling on itself? It’s melting,” Henson explained. “That is melting. There is no ash, it is now a hard plastic, that’s melted. Imagine getting that on your skin. Have you ever burned plastic to your skin?”

In a follow-up, Henson also explained how acrylic potholders aren’t just a danger for people who use them: It could potentially leave the seller liable for the harm caused by it. How can you tell if your yarn is safe to use for something hot? In the case of acrylic yarn that can be found at your standard craft store, it’s denoted by an illustration of an iron x-ed out, meaning that you shouldn’t iron anything made with that yarn—and by extension, expose it to extreme heat.

It’s a lesson that some crocheters learned the hard way; many of them made items like coasters with acrylic yarn only to have them melt when hot mugs were placed on them.

Staying away from acrylic yarn when making potholders seems might seem like a no-brainer message to many crafters. But with more people learning to crochet through channels like TikTok, it’s better to loop everyone in with a refresher than for someone to get burned because they had no idea.