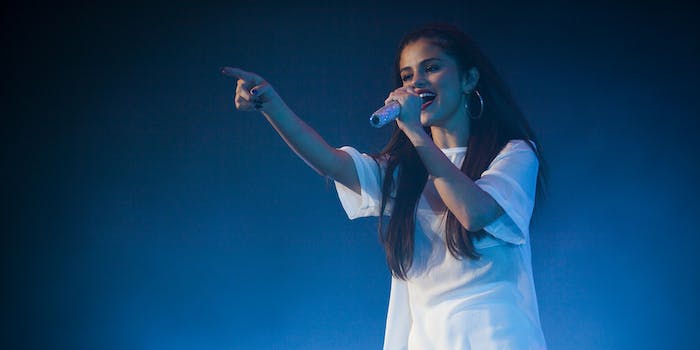 Every young woman should hear this.

Recently, a bunch of photographs of actress Selena Gomez were published. According to the expert sleuths at CSI: Internet, these pictures showed that Gomez has gained some weight. So, of course, every celebrity news outlet picked up this story and ran with it, because in spite of literally everything else happening in the world, what’s most important right now is calling a young woman fat.

If you ever feel like maybe you want to barf forever, I highly suggest googling “Selena Gomez weight gain” and then scrolling through all the articles gleefully discussing her “fuller figure” and “new curves.”

A few sample headlines include:

First of all, whoever wrote those headlines should be fired not just because they’re fat-phobic jerks but also because they are clearly bad at putting in words in some type of order. I could pour a can of alphabet soup onto the ground and probably the letters would arrange themselves into better headlines. An alien species that is completely incorporeal and exists only as binary code thoughts in a data stream and has no clue what a body actually is could write a better headline.

In spite of literally everything else happening in the world, what’s most important right now is calling a young woman fat.

Even the Internet tabloids that are purporting to be positive about Gomez’s “new body” (spoiler alert: it’s the same body she’s always had) are being super gross about the whole thing. The tone used in most of these articles is patronizing at best, congratulating Gomez for being brave enough to love her body just the way it is. Here’s a thought: Maybe Gomez would have an easier time feeling loving herself if the Internet stopped reporting on her size. I know that’s a lot to ask for, but a girl can dream, right?

The one shining star in this whole debacle (other than Gomez herself, of course, who responded by posting a bunch of swimsuit pics to Instagram with captions about how happy she is) has been actress Abigail Breslin, who came out in Gomez’s defense with both fists swinging. In what is maybe my new favorite Tumblr post ever, Breslin writes: 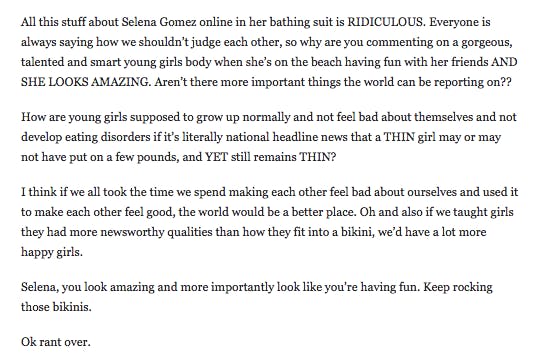 Aside from my obvious delight over Breslin taking body-shamers to task, what makes me happiest about this is seeing women show up for other women. It would have been so easy for Breslin to say nothing, or, worse, to make a flippant remark about Gomez’s body. Instead, she chose to put herself in the line of fire by speaking out.

You’re probably thinking, “Of course, Abigail Breslin did that. It’s what any right-thinking person would do. What’s your point here?” My point is that sisterhood is easy in theory but hard in practice. There are so many things about our culture that make it difficult for women to stand up for each other, and when they do, they often end up paying for it in one way or another. There aren’t a lot of rewards for calling out injustice; in fact, doing so is often seen as an invitation for abuse.

Girls—especially girls living and working in toxic environments like Hollywood—are taught from day one to have a scarcity mindset about women and success. They are told over and over that there is only room for a handful of women at the top and that the only way to succeed is to treat every woman as your rival. Girls aren’t socialized to support or elevate other girls; instead, they’re socialized to throw each other under the bus.

You often hear people say things like, “women are so catty,” or “girls are so mean to other girls.” What’s missing from those statements is any analysis of why that might be. It’s like people would just prefer to think that too much estrogen makes you a bitch rather than considering that women’s lives are basically a master class on sly competition.

Instead of being permitted to be outwardly aggressive with each other the way boys are, girls are encouraged to make underhanded comments, to slight while smiling, and to nip at another girl’s self-esteem until she can’t take it anymore and caves. This, women are told, is the only way for them to get ahead.

Internalized misogyny is a hell of a drug. When girls grow up in a culture that feeds them endless toxic messages about who and what they are, it’s a constant struggle for them to love themselves, let alone extend that love to all the girls around them. And when the cost of standing up for a woman being publicly shamed is to receive the same treatment yourself, it’s easy to see why so many women would rather stay silent than go to bat for each other.

But Abigail Breslin did it. She fully showed up and shut all the haters down. And now I just want to hug her and tell her she’s amazing and then maybe wipe a tear from my eye because she gives me so much hope for the future. When I see young women stepping up and supporting each other, all that I can think is that maybe there’s an end to this cycle of self-hatred. Maybe we are actually taking steps in the direction of loving ourselves and each other.

If only all of us could follow her lead, the world would be a better place for it.