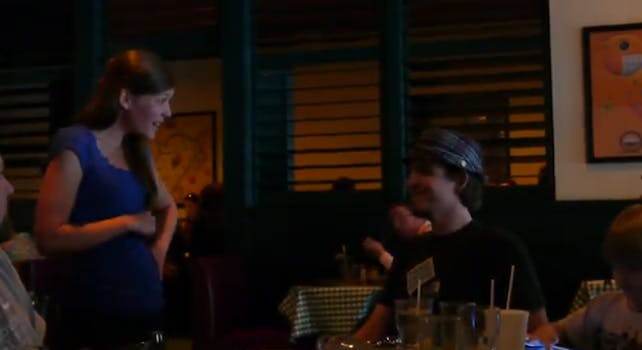 Aaron Collins asked his family to give a $500 tip on a pizza to honor his memory. The resulting video is having a ripple effect on YouTube.

After raising $500 dollars through Paypal, Collins’s family fulfilled Aaron’s request to give a big tip to a waiter or waitress.

“Leave an awesome tip (and I don’t mean 25%. I mean $500 on a f***ing pizza) for a waiter or waitress,” Aaron requested. His brother Seth said that Aaron was always a generous tipper, once giving a terrible waitress $50.

The Collins family went to Puccini’s in Lexington, Ky., and after eating pizza they presented the tip to their waitress, which Seth captured on video and posted to YouTube on July 11.

“Are you kidding me?” the waitress said in disbelief, who decided to share the money with the rest of the staff at Puccini’s.

The video has been viewed over 780,000 times and helped Aaron’s message spread. Many who have seen the video have been touched, and the Collins’s have raised over $10,000 in donations since the video went viral. The family plans to give a $500 tip to 23 more people.

Seth hopes that his brother’s wish will inspire people to pay it forward.

“Our goal is to do this once a week, for as long as you give us the opportunity,” Seth wrote. “The stories, comments, and note have touched my heart. They have given my mother, father, sisters, and me strength.”