Aaron Carter blocked me when I called him out for cyberbullying

Asking your followers to cyberbully a girl who made a harmless joke is not OK. Even if you're my childhood celebrity crush.

Sunday night I was scrolling through my Twitter stream when I came across a tweet from one of my childhood celebrity crushes, Aaron Carter.

All of my followers feel free to chime in on what these miserable bitches had to say.

Aaron tweets and retweets a lot, so normally I would have scrolled right by his tweet, except I saw the words “miserable bitches” in it and was confused. I thought someone must be majorly trolling for him to be so upset. Reading his timeline, I discovered he tweeted “I always tried to be the _______ kid on the block” two hours earlier and was mad because someone replied with “crackhead.”

I can understand being upset or annoyed by this, but someone who is a “public figure” (that is, has almost 400,000 followers) asking his rabid teen fan base to “chime in on what these miserable bitches had to say” is not the proper way to deal. I was upset because I knew this poor girl was definitely going to be harassed (and she was; her account is now locked), so I called bullshit and tweeted about what he was asking his fans to do.

Lol @AARONCARTER “has class” but asks his twitter fans to cyber bully one of his teen followers. pic.twitter.com/yKw2EUKu0T

Shortly after I tweeted that, he retweeted me and said, “looks like that comment back fired on you,” whatever that means.

@AARONCARTER what does that even mean? I understand not wanting to be harassed but as a public figure you should know how to deal.

@AARONCARTER you basically asked your followers to harass that girl.

@AARONCARTER yeah because they were probably getting death threats because of you, well done my teen idol!

I was suddenly flooded with tweets from his fans attacking me.

Then I was blocked. big LOL. 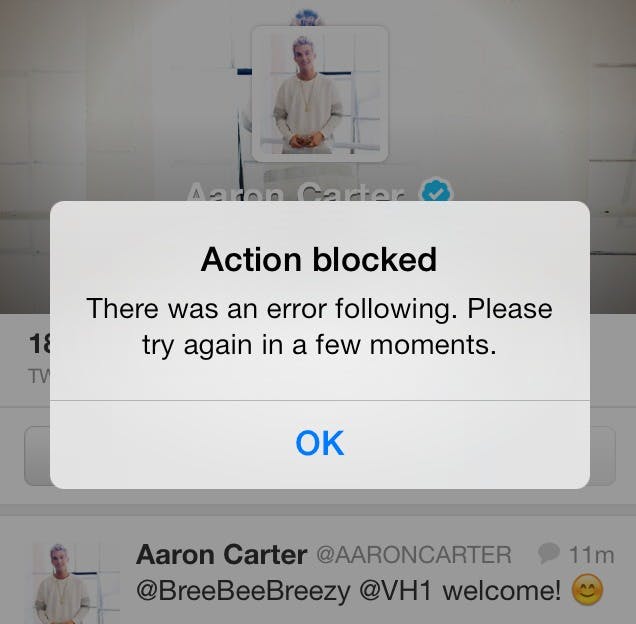 I’ve always been a fan of Aaron Carter. I even tweeted at him almost 50 times to get him to follow me when he joined Twitter (me, a 23-year-old!). But asking your followers to cyberbully a girl who made a harmless joke is not OK.