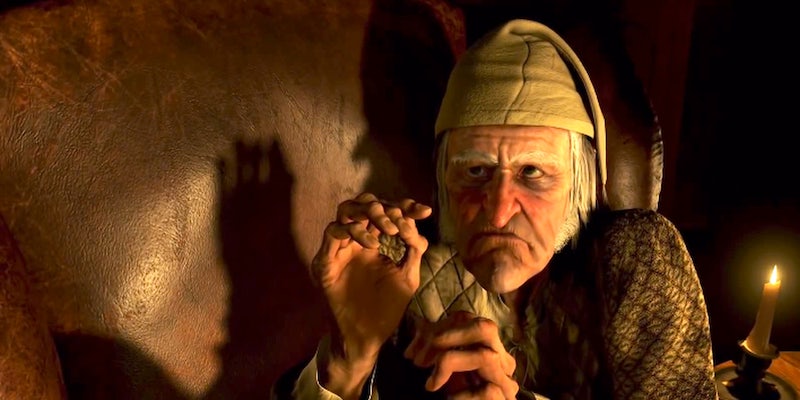 Finally, a ‘Christmas Carol’ even giggling 10-year-old boys can enjoy

What better way to improve upon a timeless tale than to add d**k jokes?

What better way to improve upon a timeless tale than to add dick jokes?

Charles Dickens’s A Christmas Carol has been retold and adapted countless times over the years, largely thanks to the novella’s addition to the public domain. But the latest twist to the Dickens tale brings a somewhat common issue to the forefront.

Sure, we’ve seen Muppets immersed in Victorian England, but they’ve never touched on this.

Rifftrax’s Conor Lastowka is the mastermind behind the adaptation, which is essentially the same tale we’ve read and watched over the years, except for one glaring difference: Ebenezer Scrooge has a boner that he’s trying to hide throughout the entire story.

It’s essentially Pride and Prejudice and Zombies and Huckleberry Finn Robotic Edition for Victorian literature, according to Lastowka. You don’t have to read the original text, but you’re essentially getting the same story.

“However, if you are a sixteen year old boy and are forced to read it for a book report, you may find it more fun to read the version that has the word ‘boner’ in it nearly four hundred times,” Lastowka wrote. “In fact, you might just say that A Christmas Boner really puts the ‘dick’ in Dickens! (Do not say this.)”

In the first paragraph alone, Scrooge’s boner is front and center at the most inappropriate of times—and it only gets harder to conceal from the “non-bonered” from there:

MARLEY was dead: to begin with. There is no doubt whatever about that. From the moment Marley was interred, Scrooge had a permanent boner. There is no doubt whatever about that as well. The register of his burial was signed by the clergyman, the clerk, the undertaker, and the chief mourner. Scrooge signed it, then immediately got a boner: and Scrooge’s name was good upon ‘Change, for anything he chose to put his hand to. Old Marley was as dead as a door-nail.

And does he deliver. In the 125-page ebook, which Lastowka is offering for free on various tablets and includes in its entirety on his blog, he mentions (minus the introduction):

There’s probably plenty of penis euphemisms we’re forgetting, but you get the idea. It makes your high school reading a lot more interesting, and puts some zest into an annual Christmas tradition.