What a networking opportunity.

September 2016 marks the 15 year anniversary of 9/11, the massive terror attack on American soil that altered our country in irrevocable ways—to say nothing of its global implications.

A man who’s spent the majority of his adult life away from the U.S. has decided to observe that solemn milestone by launching a crowdfunding campaign to recreate the horror of the day itself.

“Alright. Hey. It’s Paul from paulsalo.com and today we have a very, uh, exciting project.”

So begins the awkward video introduction to 911 Redux, an Indiegogo campaign through which Salo hoped to purchase a “747 or equivalent aircraft about to go out of service,” fill it with jet fuel, “purchase a building that’s about to be torn down” and, well, you know what happens next.

This man is on a hunt for the truth and is literally offering donors a front-row seat to the action. For $5,000. 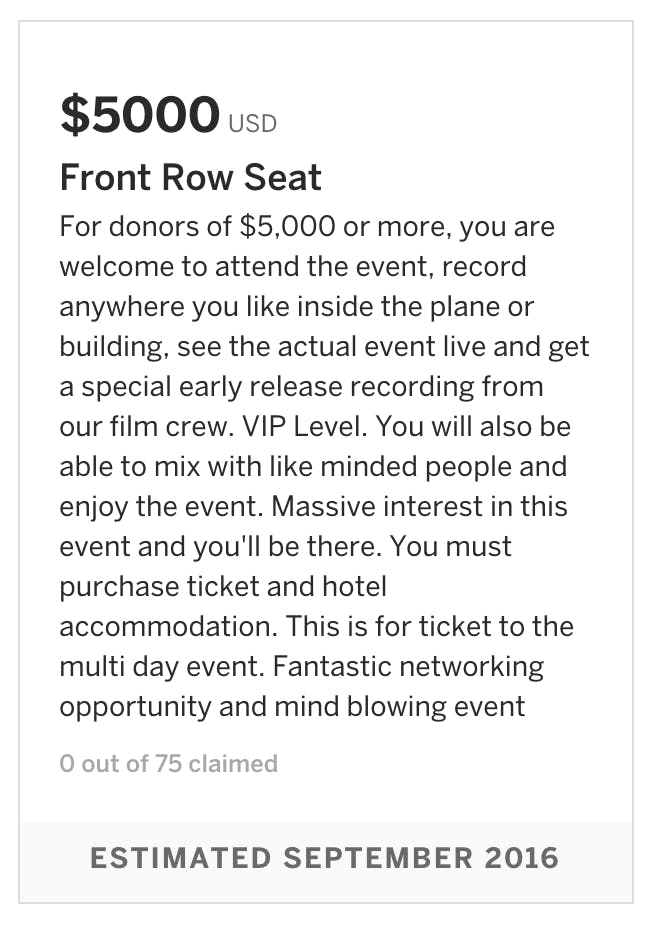 Who knew that the tasteless recreation of an event that killed thousands would share the same descriptors as SXSW? Nothing says “networking” like plunking down that business card during senseless destruction.

Salo even took the “never forget” refrain of tragedy to the next capitalistic level with his $1,000 perk: an actual piece of the action. 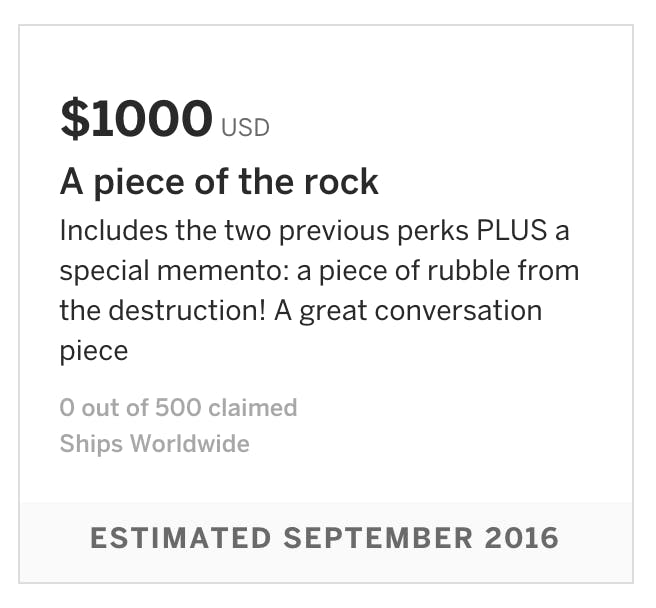 The middle-aged expat wants to be “like a Mythbusters for September 11th.” According to his LinkedIn profile, he has “20+ years Asia experience.” Let’s just say he’s not the most culturally sensitive truth-seeker out there.

His pie-in-the-sky plan includes buying a building in the countryside to destroy. He cares little about its structural similarities to the Twin Towers, other than the aside that it should be “WTC-like.”

Salo is currently in Thailand, but like all good nomads, he’s willing to travel. In fact, he’s willing to go to any country to get this sicko dream of his accomplished, though listed off just two continents: Africa and South America. Smooth.

From the start, the execution on this project is shoddy. Salo’s after a 767, according to the description of the Indiegogo campaign—which is definitely not a 747. To say nothing of the numerical difference, a 767 costs significantly less than a 747, can’t go the same distance, cruises at a different altitude, and accommodates fewer tons of cargo.

Ignore the disinterest and don’t you dare worry about this project going awry. “If we miss the building, obviously that sucks but we’re gonna buy another plane and we’re gonna do it again,” Salo said determinedly.

Salo sought $1.5 million in the Indiegogo campaign, though the number he throws around in his video is $300,000. It’s worth noting that the project has a “flexible goal,” meaning Salo would receive all the cash he earns at the end of the campaign whether he reaches that mil and a half or not.

Salo had raised $441 from 19 donors by Wednesday. Indiegogo was in the process of removing his campaign later that afternoon, however. An Indiegogo spokesperson attributed this decision to 911 Redux reportedly violating the site’s terms of services. The Daily Dot has reached out to Salo and is awaiting a response.

Prior to the big coverup crowdfunder’s disappearance, 911 Redux’s Twitter presence showed less of a passion for truth and more a fawning interest in being written up by as many entities as possible. Info Wars? Check. Drudge Report? Oh, you bet your ass.

Made The Independent! This is a serious newspaper. Officially over the moon today https://t.co/8YGyT83fG1

TheLipTV interesting take on 911 REDUX vid. Rest assured that was are building a team of engineering experts https://t.co/iXlzG8fnVw 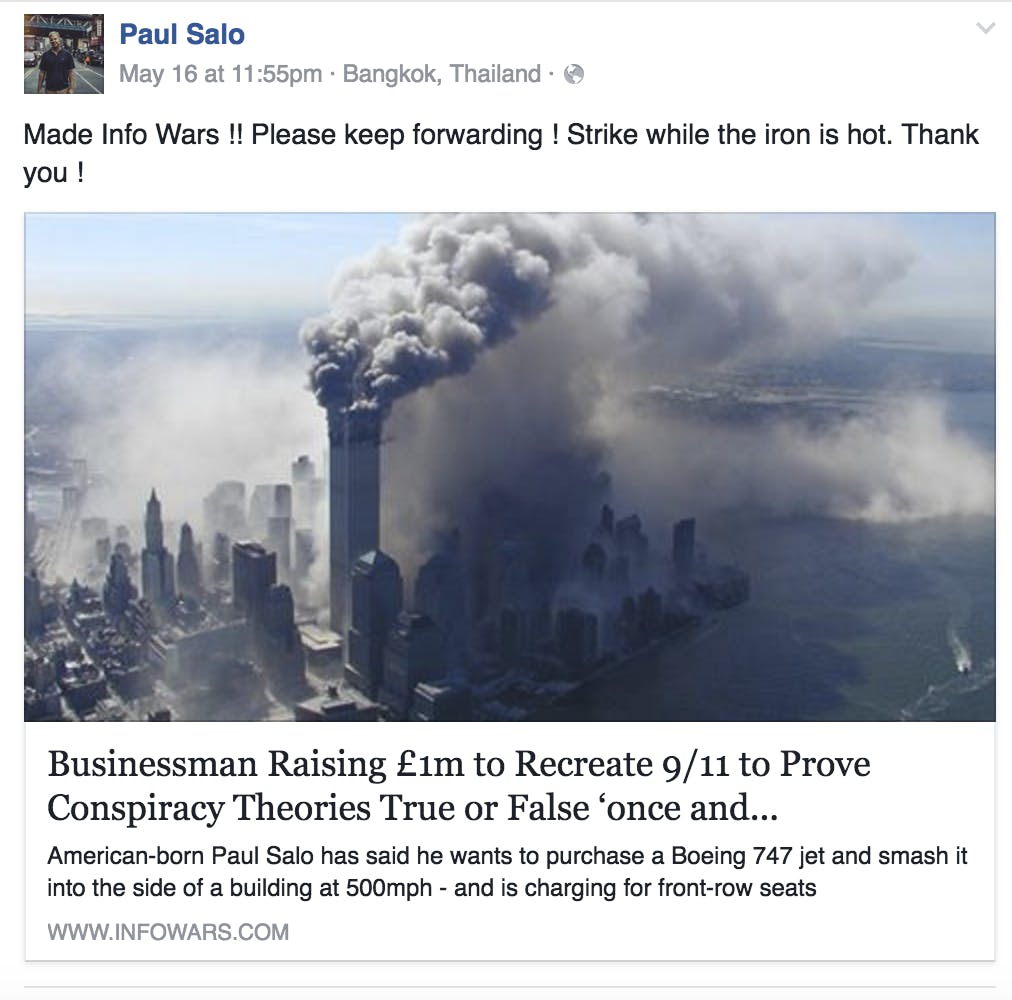 A bigger conspiracy than jet fuel’s inability to melt steel beams is undoubtedly the motivation behind Salo’s project. Whether he’s awake, curious, and trying to do a public service or not, the bravado and frequency with which the man says his own name and website is pretty damn suspect.

Salo garnered publicity like a sideshow crier screaming oddities at a county fair. This is the “DJ Khaled broke iTunes” of the crowdfunding era. And it was really poorly done.

For what it’s worth, Salo appears to be more than willing to hear the feedback of others. He repeatedly pimps out his email address and encourages interested parties to send him advice, stressing that the costly destruction of property and endangerment of donors is “an open discussion.”