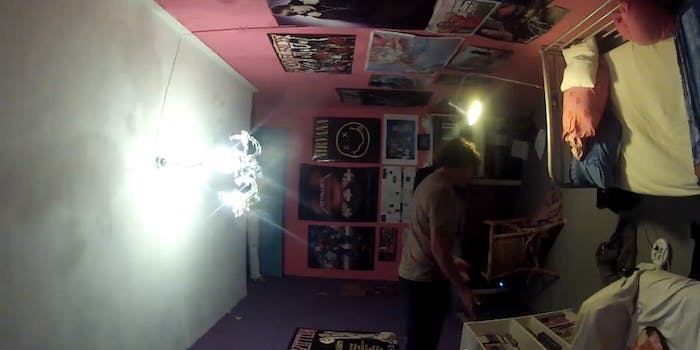 This is some serious, next-level trolling.

The only thing better than getting the last laugh is getting it twice.

Last year, in retaliation for an embarrassing Facebook prank, a Dutch dude transformed his little brother’s bedroom while he was on holiday into a pink wonderland fit for a 7-year-old princess.

That should’ve settled the score. It didn’t.

This time around, he took an even more drastic approach, tilting the room an entire 90 degrees. That means the carpet, bed, sofa, and everything else that was once situated on the floor got moved and fixed to right wall—and so on.

It’s some serious, next-level trolling, like a bizarro version of Extreme Makeover: Home Edition. And the brother’s reaction is priceless. His commentary, for the most part, is in Dutch—the YouTube video is shot in the Netherlands—but there’s no translation needed for his initial outburst: “What the fuck?!

Here’s the accompanying time-lapse video of the revision process.