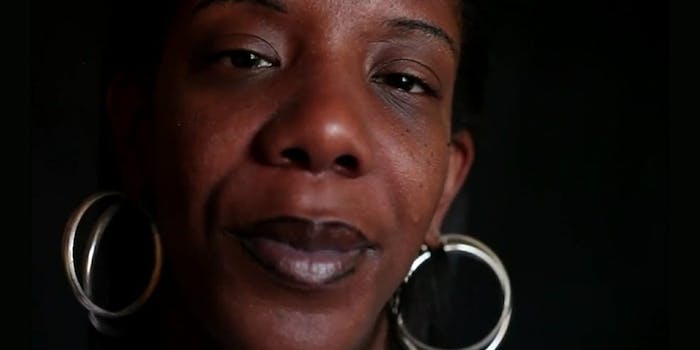 Marcy Borders lost her battle with stomach cancer that she blamed on 9/11 aftermath.

One of the most iconic images circulated after the attacks on the World Trade Center on Sept. 11, 2001 was that of a young professional woman, mouth agape and her entire person covered in dust, squinting towards the camera. That woman, christened “dust lady” after the photo emerged, was New Jersey’s Marcy Borders, who died Monday at the age of 42 of stomach cancer. She blamed her illness on dust she inhaled after the attack.

Borders worked for Bank of America on the 81st floor of the North Tower when American Airlines Flight 11 hit the building a few stories above her own. Though her supervisor directed employees to remain at their desks and await fire wardens, then-28-year-old Borders ran for the stairs and made her way down to ground level. A second plane hit the South Tower once she did. When it collapsed, it sent a cloud of dust and debris around her.

“Every time I inhaled, my mouth just filled up with it,” she explained to filmmaker Mike McGregor in 2012. “I was choking, I couldn’t see my hand in front of my face. I was just saying to myself, saying out loud that I didn’t want to die,” she said. “A stranger grabbed me … he took me to safety, and I guess this is where this picture was taken.”

“I can’t believe my sister is gone,” Michael Borders wrote on Facebook of his sister, who had no idea that she had been photographed until her mother saw the picture and contacted her.

In an interview with the Jersey Journal last year, Borders vocalized her opinion that the events of 9/11 were directly linked to her cancer, which developed a year ago: “I’m saying to myself ‘Did this thing ignite cancer cells in me?’ I definitely believe it because I haven’t had any illnesses. I don’t have high blood pressure … high cholesterol, diabetes. How do you go from being healthy to waking up the next day with cancer?”

The scene that Borders witnessed on 9/11 haunted her for the rest of her life: “I saw people with things sticking out of them, covered head to toe in blood. I couldn’t understand it.” She experienced severe depression and an addiction to crack cocaine, afflictions she battled with for approximately a decade.

“By 2011 I was a complete mess,” she said. “I was convinced Osama bin Laden was planning more attacks. Every time I saw an aircraft, I panicked. If I saw a man on a building, I was convinced he was going to shoot me.”

Borders lost custody of her two children but in April of 2011 checked into rehab, made amends with her family and remained sober. After being diagnosed with cancer she underwent chemotherapy last summer, with further plans for surgery, radiation and additional chemotherapy scheduled for this December.

“Marcy Borders has unfortunately succumbed to the diseases that has ridden her body since 09/11,” her cousin, John Bordes posted to Facebook Tuesday. “In addition to losing so many friends, coworkers , and colleagues on and after that tragic day. The pains from yesteryear has [sic] found a way to resurface.”

While it remains unknown whether the events of Sept. 11 were directly tied to Borders’ death, thousands of emergency crew workers, survivors and local residents who were at or near Ground Zero on and following the events of that day have been since diagnosed with cancer.