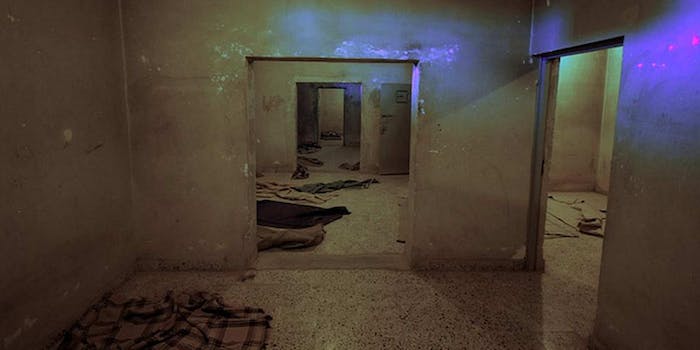 The Baghdad prison was hit by a military-style raid Sunday night, freeing senior members of al Qaeda and others.

While we were all frothing over a British prince we’ll never meet, some legitimate news of consequence was buried on Twitter. Al Jazeera reported that on Sunday night, armed militants raided Abu Ghraib in Baghdad, as well as a prison in Taji, 12 miles north of Baghdad.

According to Al Jazeera reporter Jane Arraf, “the attacks appeared to have been staged in an attempt to free prisoners.”

After suicide bombers drove cars through the prison’s gates and gunmen launched grenades and mortar fire at guards, it’s estimated around 500 prisoners escaped the violent clash, including senior members of al Qaeda, many of whom were facing death sentences. A few escapees have been tracked down and detained, but the majority of inmates are still at large.

So why was this event not reported in the U.S. until 24 hours later? And why are no major news networks covering it? Many theories and questions abound on Twitter.

Obama’s intricate plan to use the royal baby as a smokescreen while he springs 500 Abu Ghraib inmates: ADMIRABLY SUCCESSFUL

This break-out is part of a larger trend of recent attacks in Iraq, which started around Ramadan. Still no updates on the whereabouts of these alleged terrorists, though areas around Abu Ghraib are on lockdown.