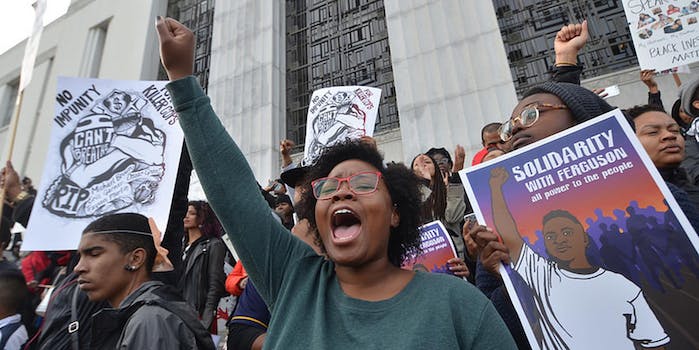 5 things everyone needs to stop saying about #BlackLivesMatter

It's time to stop making these mistakes.

Over the past year, the Black Lives Matter movement has risen to become one of the most prominent, successful civil rights effort of our time. It’s been a harrowing road for many on-the-ground activists but, through it all, the movement has grown even stronger. More likely than not, you’ll get into a conversation about it sometime, so maybe you could use some tips.

For the record, I’m white, and I come at this from that perspective. Maybe, because the dire issues that Black Lives Matter is confronting don’t impact your daily life (which is an apt example of white privilege), you’re not as confident in discussing it as you’d like. Maybe your heart is in the right place, but you’re confused by some things, or you’re worried about saying something the wrong way.

Or maybe your heart isn’t in the right place—maybe you’ve internalized some downright damaging ideas that demand some self-reflection. In any event, here are five things you shouldn’t say while discussing Black Lives Matter, and why these statements miss the mark so badly.

If #AllLivesMatter we wouldn't have to say #BlackLivesMatter

Yet here we are, screaming it & yall STILL trying to talk over us.

When Black Lives Matter activists are met with the retort “All Lives Matter,” things often get a little testy. This was on full display when former Maryland Gov. Martin O’Malley dropped an “all lives matter” comment Netroots Nation in July. (He also snuck in a “white lives matter.”)

Here’s the simple reason: Black Lives Matter is a protest movement seeking to specifically address a crisis in how the justice system treats black life as uniquely disposable. Therefore, countering with “actually, all lives matter”—in addition to it being something everyone already agrees on—is the height of condescension and derailment.

If all lives really did matter in how America’s institutions acted, then the Black Lives Matter movement likely wouldn’t exist. But that’s not the case—at least, not yet. If Black Lives Matter had its way, however, it would be. So maybe stop trying to needle activists locked in a literal protest for their lives?

FYI, #NativeLivesMatter is meant to expose the more than 500 years of systemic oppression of indigneous peoples. pic.twitter.com/Uy2pBSQYTf

Assuming you’re a good-faith operator in this, here are some questions to ask yourself when a derivation on Black Lives Matter springs into your mind:

a) Am I about to appropriate the title of one of the foremost black protest movements in America today?

b) If so, why am I appropriating it? Am I using it to draw awareness to other oppressed minorities, in a spirit in keeping with the original protest? Or am I using it to rally support for those whose lives are already institutionally protected?

c) Is there a better way to make this point without using the “_____ Lives Matter” formulation?

d) Am I saying this to raise awareness of something that’s worthy and overlooked, or am I doing it to dilute the attention on black lives?

e) Do I really need to say anything right now, or should I just hang back and listen?

Simply put, if you’re wanting to use a hashtag that’s derivative of Black Lives Matter, you probably just shouldn’t. But if you must, think about whether you’re drawing attention to a cause that’s similarly just, urgent, and worthy—like Native Lives Matter—as opposed to one that’s trollishly self-evident, like Blue Lives Matter. (Sorry, Smurfs.)

3) That Netroots protest was rude and ineffective

When O’Malley and Sen. Bernie Sanders (D-Vt.) were interrupted by an organized Black Lives Matter protest at Netroots, both of them fumbled the situation badly. Sanders cut his appearance short, in fact, and reportedly canceled meetings with some prominent black figures he had scheduled for the day.

But the two Democratic presidential candidates nonetheless got an awful lot of support from some finger-wagging progressives. It generally fell along the lines of “now nobody will want to come to Netroots,” or “you’re just helping Hillary,” or it was a question about tone and tactics that claimed the protest was rude and ineffective.

That last point can no longer be asserted with even a shred of credibility, and it’s worth asking any liberal who insisted that to consider just how wrong they ended up being. Since the Netroots protest:

You can make a lot of arguments about which form of protest is more effective than another. But if you’re still denying that what happened at Netroots was entirely effective, you may have some ulterior motives worth examining.

4) Did you know Bernie Sanders marched with Dr. King?

"Bernie Sanders walked with MLK!"
He could have been his secret lover and I would still be asking what are you doing to end white supremacy?

Sanders is the most vividly relevant example of this phenomenon, although this applies just as well for any political candidate/speaker: Don’t try to use Dr. Martin Luther King, Jr. as some sort of rhetorical one-up.

First of all, MLK was a person just like any other, and while he’s been largely deified by mainstream American history (and the true radicalism of his activism whitewashed), he doesn’t speak for all black people, much less the wispy, selective-memory version of his legacy that’s thrown around nowadays. To use his legacy as a rhetorical cudgel against black dissent is cheap at best, and racist at worst.

Second, it isn’t particularly enlightening to learn that Sanders, or any liberal of a certain age, marched in King’s days. It means they weren’t morally bankrupt supporters of segregation and white supremacy, sure, but nobody really thought that about Sanders. Rather, the concern is that his views on race are too myopically fixated on economic factors, rather than white supremacy.

And third, and maybe most importantly, if you’re a Sanders fan who’s about to tweet at a politically engaged black person about marching with MLK, just don’t. Because it comes off as hectoring and condescending, even more so because everyone basically knows it already.

5) That victim of police violence was “no angel”

Recall the Michael Brown "He was no angel" narrative, printed in the NY Times, among other outlets. #SamDubose https://t.co/D6NVi1Z6kx

You don’t have to be a perfect person to be a victim of injustice. This would be highly obvious to almost everyone, given an appropriately demonstrative example.

Imagine a white teenager gets caught for underage drinking is sentenced to 60 years in prison. That example may sound extreme, but now consider this: A 35-year-old black man with an arrest record gets fatally shot for fleeing a cop.

In every sense, this is an even more drastic, gross miscarriage of justice than the drunken teen example—because it’s effectively the application of a death sentence. People should not be killed without trial unless there’s absolutely no way to avoid it. It’s frankly shocking just how cavalier we all accept these kinds of deaths nowadays.

And yet, can you imagine which person would get the more favorable coverage? It’s hard, if not impossible, to imagine many pundits or reporters bringing up the teen’s inciting wrongdoing to justify the treatment. The penalty for getting prematurely sauced isn’t six decades of your life, nor would anyone argue it should be. But when it’s a black person in trouble with the law, or lying dead from a gunshot wound, suddenly everything they’ve done leading up to that moment becomes breathlessly reported, whether the information is relevant or related at all.

Simply put, if you’re reading about a black person killed under dubious circumstances, try thinking of them as a victim first and work from there, rather than rifling around to see if they’ve ever been caught with a joint.