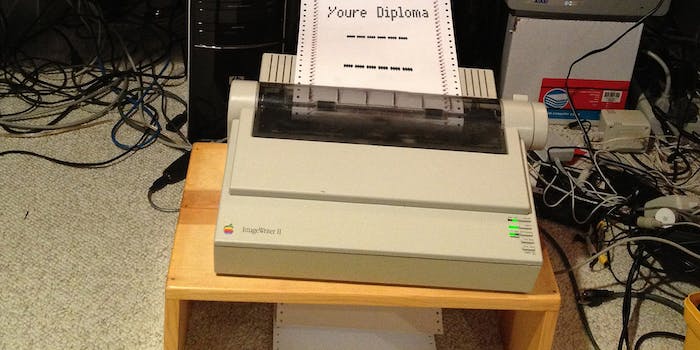 5 surefire signs your college is fake

The for-profit college industry is booming in the U.S., despite a federal crackdown and thanks in no small part to the Internet, which has made the prospect of stay-at-home education seem plausible, if not quite prudent. But many online universities are non-accredited, barely staffed, and financially predatory: Just this month, a woman named Susan Xiao-Ping Su was sentenced to 16 years in prison for running Tri-Valley University, a front that allowed her to take in $5.6 million via the sale of fraudulent student visa documents to immigrants.

Most of Su’s “students” were aware of her scam and just looking to remain in the country under the pretext of academic study; in other cases, customers really do believe they’re taking an important step on the path of self-improvement, one that will increase their odds of employment and enhance their standing in the world. How can one avoid institutions that only exist to bleed you dry? You might keep an eye out for the warning signs listed below. (And probably don’t enroll at Harvard, if you can help it.)

1) The expectations are low, or nonexistent.

You know what there’s a lot of in college? Yeah, besides beer pong. Homework! If you’re not getting much in the way of assignments—i.e., the things that prove you understand the concepts presented in your classes—then it’s likely there’s no one on the other end to grade it or give you feedback. Consider the Ivory Tower that is Newburgh Theological Seminary & College of the Bible, which will grant you a Ph.D. for the Herculean task of reading an entire book and describing what it’s about, much as you did in elementary school. (Editor’s note: That’s an exaggeration, of course—Newburgh’s “Doctor of Philosophy In Christian Counseling,” for example, requires 40 hours of coursework and a dissertation—but you get the idea.)

Still, that dubious degree is enough to get you a job as assistant deputy minister in the Department of Education—in the Yukon. Most graduates, however, will be left out in the cold.

2) A credit card is the only prerequisite for admission.

An Adult Swim parody “infomercial” advertising “For-Profit Online University” nailed this point with a wide-eyed student testimonial: “Enrolling was easy, because they already had my credit card information on file!” Another adds: “Technically, if you have a credit card, you’re already enrolled.”

This isn’t far from the truth, sadly. Several years ago, GetEducated.com successfully purchased a $499 MBA for their mascot—a pug named Chester—from Rochville University. A week after ponying up the money, they received a package from Dubai that included Chester’s diploma, “two sets of college transcripts, a certificate of distinction in finance, and a certificate of membership in the student council.” His GPA was given as 3.19, though for just $100 more, “he could have graduated with honors.” Excelsior!

3) The school makes too many promises.

Not even the most prestigious schools in the nation guarantee employment for those who complete their curriculum, but a host of relative unknowns do just that. If you read the fine print, this usually means the opportunity to stay on for another few useless if discounted classes, but in other instances, it’s blatant false advertising.

The good news is that courts have a history of holding for-profit colleges accountable for rosy promises made in their promotional materials. Chain cosmetology programs like Empire Beauty School (109 locations nationwide) have been routinely sued for failing to impart skills that would prepare students for an entry-level stylist job, while people who attend technical college often complain that seminars are poorly structured and skimpy on content—or simply advertisements for other classes.

Because scam universities are all about the bottom line, they’ll pursue prospects at all costs. In a recent investigation, Corinthian Colleges Inc., the company that owns the Everest College brand, was revealed to have placed aggressive daily sales calls to anyone who so much as expressed curiosity about courses or financial aid, and induced non-English speakers sign enrollment forms they didn’t understand. Last February, the Consumer Financial Protection Bureau sued the notorious (and wildly profitable) ITT Educational Services Inc. for strong-arming consumers “into expensive loans destined to default”:

The CFPB’s lawsuit alleges that ITT encouraged new students to enroll at ITT by providing them funding for [a] tuition gap with a zero-interest loan called “Temporary Credit.” This loan typically had to be paid in full at the end of the student’s first academic year. But ITT knew from the outset that many students would not be able to repay their Temporary Credit balances or fund their next year’s tuition gap.

This cycle of deliberate debt is all the more pernicious given for-profit colleges’ tendency to target low-income and minority communities, a business model satirized in an immortal YouTube sketch titled “Everest College Commercial – Hood Variant.”

5) The bona fides aren’t what they seem.

There are countless ways for colleges to glamorize themselves in the eyes of the consumer, from names that look suspiciously similar to those of high-pedigree schools (Sanford-Brown College, anyone?) to certifications from organizations unrecognized by the U.S. government’s Council for Higher Education Accreditation (at any given time there are dozens of these bodies active in the industry, many created from whole cloth by colleges in need of a veneer of legitimacy). While some diploma mills will tout an attentive, expert faculty, these professors may well be listed as holding bogus degrees themselves—that’s if you can even find them on the school website. Some work as shills for the company, willfully misrepresenting its motives, and the turnover is drastic, which limits accountability.

Photo via Blake Patterson/Flickr (CC BY 2.0) | Remix by Jason Reed