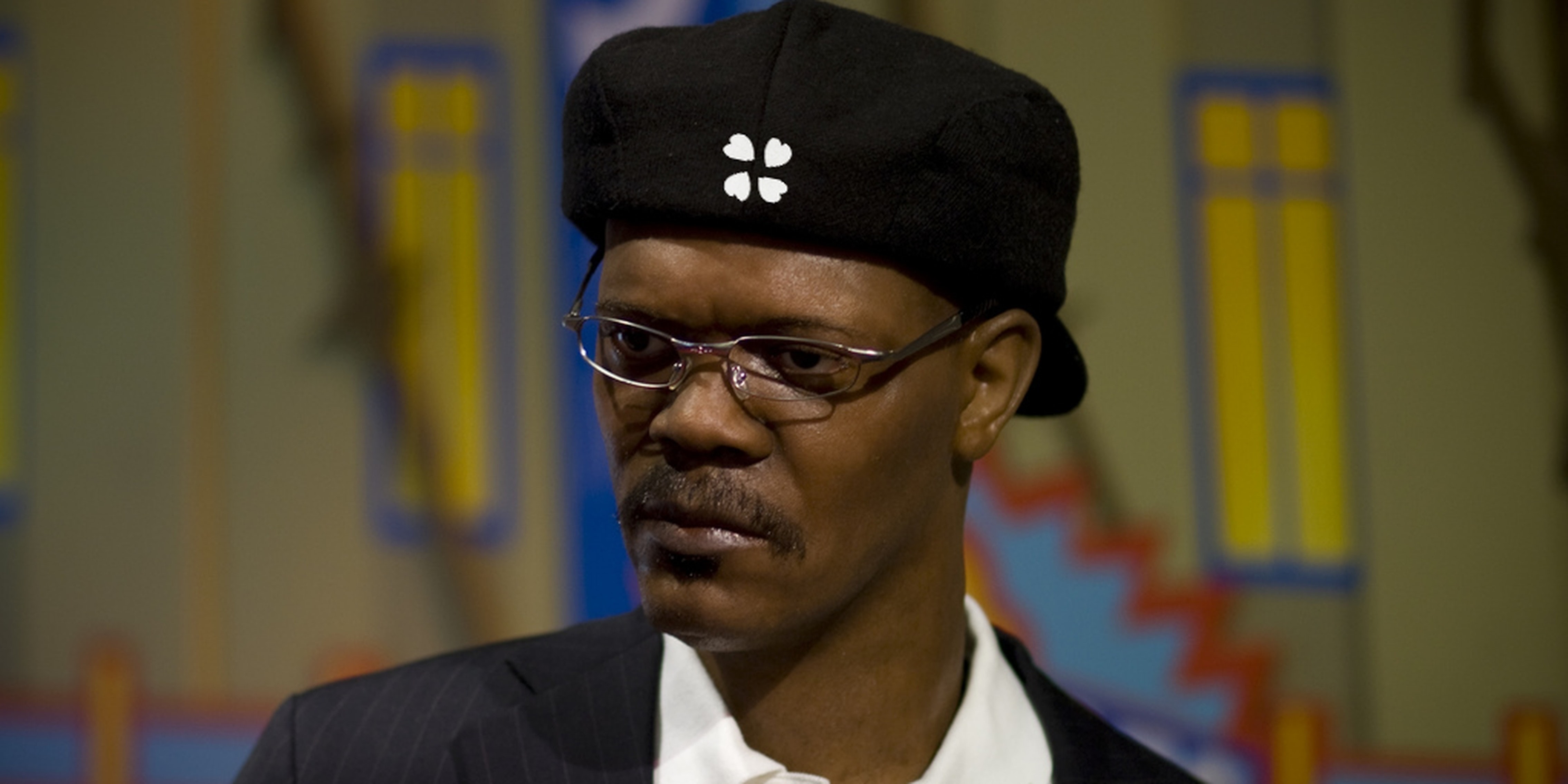 Samuel L. Jackson offered to read the monologue of Reddit's choice for charity, but 4chan's /b/ was quick to rig the voting.

Actor Samuel L. Jackson’s first experience on Reddit is one he’ll never forget. And he has the notorious trolls of 4chan’s /b/ to thank for that.

It all started on Wednesday when the 64-year-old Pulp Fiction star joined Reddit to help raise money for the Alzheimer’s Association by doing what he does best: delivering a badass monologue peppered with the word “motherf*cker.”

“It’s simple, write 300 words and the most upvoted post I’ll read out loud in monologue form,” Jackson wrote in a post on r/movies. “As a BONUS, I’m offering you all the chance to be flown to the UK for lunch with ME in return for just a tiny donation to this amazing cause. I’ll also sign a beloved Kangol hat and mail it to anyone that donates $200 or more!”

What happened over the next day or so proved to be the polar opposite of simple. Due to the Internet’s love affair with Jackson and his foul-mouthed antics, the Reddit thread was bombarded with thousands of monologue suggestions. Woven between original suggestions, like redditor teaguechrystie’s informational message, called the “new alarm clock,” were countless comments containing a story about a macho Navy Seal “involved in numerous secret raids on Al-Qaeda.” Most of these duplicate comments were deleted by the moderators but at least two (by cockrageson and slubice) ended up collecting more than 2,000 points combined. 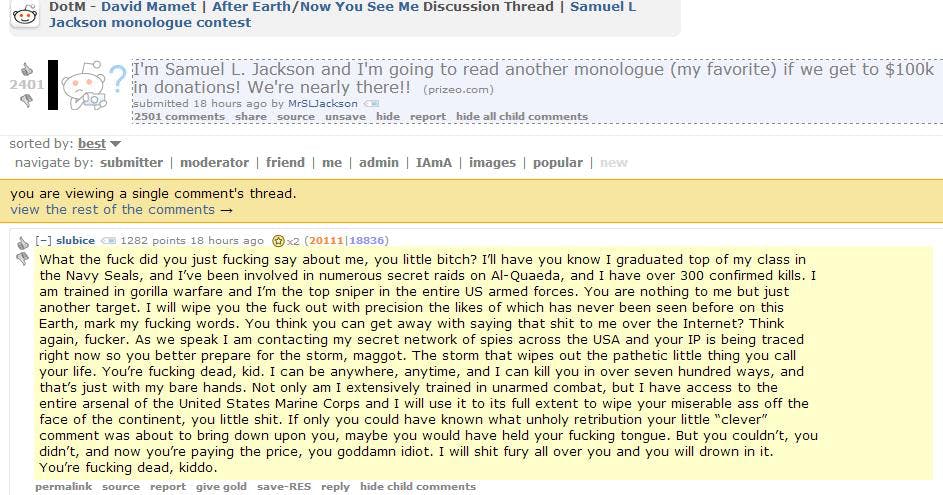 What Jackson probably didn’t realize was that these threads were posted by 4chan users in an attempt to rig the contest using what’s known as the Navy Seal copypasta, a three-year-old “facetious message containing a series of ridiculous claims and grandiose threats that portray the poster as an Internet tough guy stereotype,” Know Your Meme reported.

“Within a few minutes of the posting of this [Jackson] thread, the Internet forum 4Chan got wind of it and began a campaign to hijack this thread with the NavySeals copypasta, encouraging people to get accounts, upvote one comment and downvote the others,” r/movies moderator girafa wrote in a lengthy comment Thursday. “They even dox’d (found out the real identity of) the poster of the alarm clock monologue and have been harassing him all day.”

The details of 4chan’s raid were archived on chanarchive. In the original 4chan post, an anonymous user singles out comments to downvote, including the “alarm clock monologue,” which had become hugely popular and blocked the Navy Seal copypasta from the top spot.

“[N]o matter what [Jackson is] still gonna read the alarm clock bullshit and teaguechrystie will still use it to jumpstart his writing career,” one anonymous 4chan user wrote. 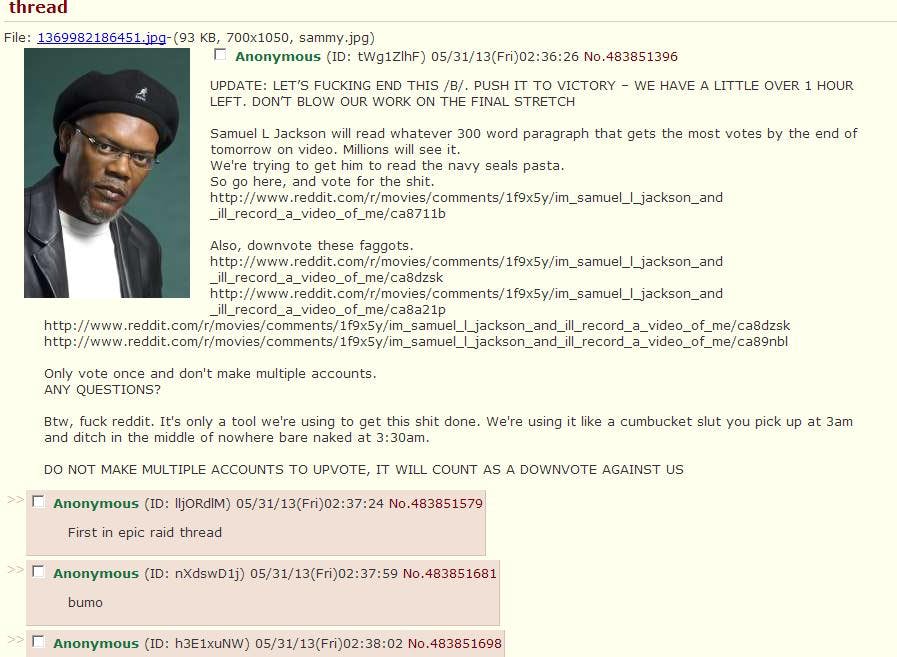 Also buried within the original 4chan thread were a handful of comments complaining over the current state of the imageboard and its renewed obsession with vote rigging.

In November, Time magazine’s coveted Person of the Year poll was gamed by 4chan’s notorious /b/ community—known for its obscene language, pornographic tendencies, and penchant for all things illegal—to have North Korean leader Kim Jong-un win the top spot. Kim collected 5.9 million votes thanks to a Java script created by Internet Relay Chat (IRC) user _js5. That same script also helped _js5 and a group of IRC users manipulate the public poll to spell “KJU GAS CHAMBERS” using the first letter of each candidate’s name.

On January 7,  4chan launched the sinister #cutforbieber hoax to encourage young Justin Bieber fans to tweet photos of their bloodied arms in response to a leaked picture of Bieber smoking marijuana. The mission: “see if we can get some little girls to cut themselves.” About a week later, 4chan gamed a public Facebook contest to have rapper Lil B perform at the 55th annual Grammy Awards. This prank, as well as one to try and vote only lighter-skinned players as starters in the 2013 NBA All-Star Game, proved to be a failure.

From the looks of it, the Jackson raid will also be a bust.

Jackson has yet to officially announce the winner of the contest, although 4chan believes the alarm clock monologue came out on top, despite /b/’s efforts.

“It went back and forth the entire time,” one anonymous 4chan user wrote. “No fucking way to tell who won because of their shit voting system. It’s really up [to Jackson] and I think he’s going to read the alarm clock shit.”

Jackson says he’s “breaking the rules” of his own contest and releasing his own speech… in which he announces he’s quitting acting to hide underground like Batman, lurking in the shadows and fighting crime with his intimidating voice.