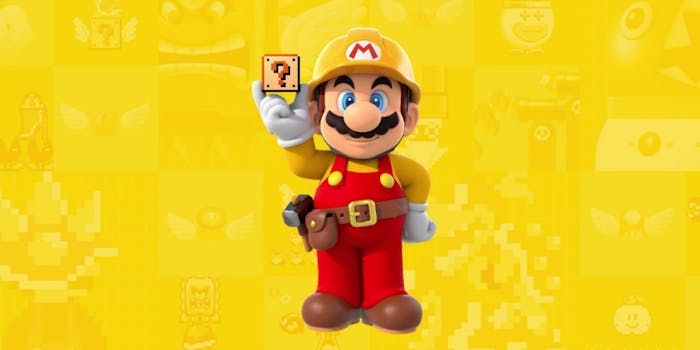 Super Mario Maker is one of the most incredible video games of all time—because it shouldn’t exist at all.

Nintendo, as a company, has always taken very crucial care of their franchise characters, which is why you don’t see, like, yearly Legend of Zelda installments. The idea of them handing over development tools to a bunch of degenerates eager to use them for evil seemed impossible.

But here we are! Super Mario Maker allows you to drag and drop assets and create the exact sort of Mario hellscapes that Nintendo would never, ever officially sanction. It seriously feels like an underground bootleg mod that somehow slipped through the cracks, like when Daniel Johnston ran into a record deal with Atlantic for a couple months.

Don’t believe me? Let’s take a look at some levels people have created.

Exactly what you were expecting

A fundamental truth of the Internet is that if creative leeway is given to children, one of them will seize the opportunity to Rickroll. It doesn’t matter what the ingredients are, what the format is, or who’s watching. This child unwrapped his copy of Super Mario Maker and immediately thought: “I wonder if I can get this thing to play Rick Astley’s ‘Never Gonna Give You Up.’” This is the life we’ve chosen. Wherever we go, we are no strangers to love.

The thing about Mario games is that you’re always going to expect the same relative echelon of difficulty. Nintendo is not in the business of freezing out players with cruel level design, so nothing ever hurts all that bad.

However, Super Mario Maker isn’t in the business of making money—which means you can create some truly antagonistic, anti-social Mario nightmares. In the above video, some enterprising youth layers a Bowser Castle with dozens of razor blades, thwomps, and lava pools, requiring these horrible frame-perfect jumps that would’ve actually made me cry if I were still 10 years old. My favorite thing about this abomination is that it’s ostensibly still Mario, right? Like, the Italian plumber who saves the princess and grabs coins and rides his dinosaur? Except now he’s locked in a fucking torture chamber and dying over and over (and over) again.

Waluigi is the Cousin Oliver of the Mario universe. He was introduced, about as inauspiciously as possible, as the Luigi version of Wario. Since then he’s been shoehorned into practically every sub-tier Mario title (think Mario Party or those sports games) as a playable character, despite having absolutely no gravitas or perspective whatsoever. Somehow this has actually made Waluigi a compelling character—a hopeless loose end in a world otherwise defined by color and magic.

Luckily, we now have the definitive Waluigi video game. Waluigi’s Unbearable Existence is a Mario Maker level that shows us just how disposable our hero truly is. The best part is when you walk down a hallway with the words “COINS WILL NEVER FILL THE VOID” spelled out in, of course, coins.

10 seconds. That’s literally all you have to jump over a ton of fire cannons, dodge a flock of flying koopas, grab a star, and decimate a row of thwomps. 10 seconds. Every move must be ridiculously precise. A single split-second hesitation dooms you. It is savage, but it is fair.

I think this is the fundamental reason I love Super Mario Maker. It’s a place where really bad, awful ideas, like “what if a Mario level was only 10 seconds,” can get played out on the grandest of stages. We now live in a world where Mario is going to be put in truly absurd situations for the rest of his life, and that makes me very happy.