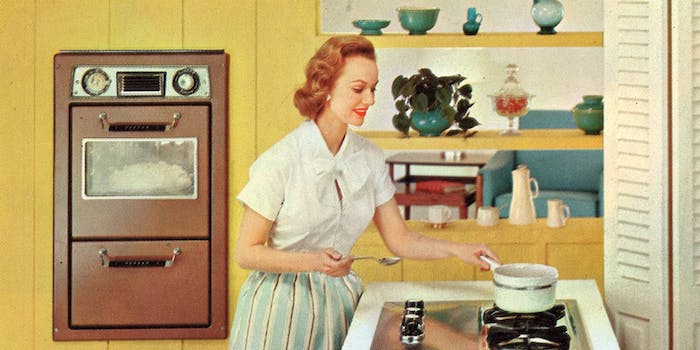 Congratulations! If you believe any of these things, you are probably not a feminist. But your beliefs are still wrong.

It’s not news to anyone when men oppose feminism. When women, do, though, it goes viral. Call it the man-bites-dog of political news.

The Women Against Feminism Tumblr is a fascinating catalogue of grievances that largely argue against a feminism that few women (if any) actually profess. Now, I won’t claim that every woman who claims to be “against feminism” just doesn’t know what it is; there are obviously people of all genders who accurately understand feminism and still oppose it.

For instance, you may be a genuine non-feminist if you think that there is no sexism anymore, that catcalling should be taken as a compliment, that the only women who get raped somehow deserved it (and men just don’t get raped, I guess, or they deserved it too?), and that there are circumstances in which people owe each other sex.

Congratulations! If you believe any of the above, you are probably not a feminist. But your beliefs are still wrong.

Others, however, clearly misunderstand it. Many of the posts on the Women Against Feminism Tumblr parrot silly myths like “feminists hate men,” “feminists think that women and men are exactly alike in every way,” “feminists won’t let me be a stay-at-home mom,” and “feminists think it’s wrong that I ask my husband to open jars for me.” In fact, a Vice article by Allegra Ringo has pointed out how many submitters to WAF seem to think that opening jars is the ultimate feminist litmus test.

There is no One True Feminism, and I can’t speak for anyone but myself. There are feminists who hate men and feminists who think that men and women are exactly alike in every way, sure. There are all sorts of people in the world with all sorts of beliefs that may or may not be based on empirical evidence.

But the feminism that the women of WAF are rejecting doesn’t sound like any I’ve encountered. Here’s what they miss.

1. Feminism is not about who opens the jar.

It is about making sure that nobody ever has to do anything by “default” because of their gender. The stronger person should move the couch. The person who enjoys cooking more, has more time for it, and/or is better at it should do the cooking. Sometimes the stronger person is male, sometimes not. Sometimes the person who is best suited for cooking is female, sometimes not. You should do what works.

But it is also about letting people know that it is okay to change. If you’re a woman who wants to become stronger, that’s great. If you’re a man who wants to learn how to cook, that’s also great. You might start out with a relationship where the guy opens all the jars and the girl cooks all the meals, but you might find that you want to try something else. So try it.

2. Feminism is not about hating men.

Not only do feminists oppose restrictive gender roles that hurt everyone, men included, but they’re probably some of the most optimistic people out there about men and what they’re capable of.

Sound surprising? Think about it: when feminists try to discuss rape, sexual harassment, and other forms of sexism perpetrated primarily by men against women, people who oppose feminism constantly tell us that this is “just how men are.” When you say that “ladies need to cover up” so that men don’t catcall or assault us, you’re implying that men literally cannot control themselves and their sexual urges. And when non-feminist women roll their eyes about men and how they can’t cook, clean, take care of the kids, talk about emotions, ask for directions, or put an outfit together properly, they sure don’t sound like they’ve got a very high opinion of them. (They also don’t seem to have interacted with all that many actual men.)

At her blog Fit and Feminist, Caitlin Constantine writes:

What makes me sad about it is that the Women Against Feminism purport to be against feminism because they love men so much, and yet like so many avowed anti-feminists, they seem to appreciate men for the functional roles they fulfill for the WAFs—as providers of paychecks, openers of jars, lifters of heavy shit—and not for the actual human beings they are.

She goes on to list all the things she loves about her husband that have nothing to do with his ability to open jars.

3. Feminism is not about “being a victim,” whatever that even means.

Some women claim that feminism is not for them because they are strong and/or refuse to “see themselves as victims” and so on. This is perplexing. In the real world, violence and injustice happen. Not all violence and injustice is based on sexism (or solely on sexism), obviously. People of color, queer people, people with disabilities, sex workers, and other groups of people are targeted by all types of violence and harassment at higher rates than others. There are statistics about this.

Some people experience violence but are able, for various reasons, to get past the experience without very much trauma or changes to their lives. Others are not. This does not make them superior to others. It usually just means they had support, resources, and probably a bit of luck.

For some women, their experience of being female is very much one of victimhood. They may have been physically, emotionally, and sexually abused by men, sometimes in childhood, sometimes repeatedly. This doesn’t mean that feminism is a way for them to somehow “choose” to be victims. For survivors of violence who turn to feminist activism as a result, the point is to prevent more violence against themselves and others, not to somehow “wallow” in their “victimhood” to gain some imagined social benefits.

In fact, society is usually not very kind to those who speak out about their experiences with violence—blaming them for what happened, accusing them of “ruining” their abusers’ lives, telling them to shut up and deal with it. It’s astoundingly myopic for these Women Against Feminism to believe that anyone derives any sort of personal benefit from talking about being a victim of violence. Rather, that act is usually one of incredible bravery and selflessness.

Many women who claim that feminism is for “victims” are able to so because they are lucky to not have experienced sexist violence. Pause for a moment and think about how egocentric it is to oppose an entire movement that seeks to help people who’ve been hurt by something simply because you have not yourself been hurt by that thing.

4. Feminism is not anti-motherhood.

Many of the posters at Women Against Feminism seem very concerned that feminists want to rob them of the right to stay at home with their children while their spouse works. It is obviously true that the feminist movement was instrumental in helping married women have the freedom to work outside the home. (White, middle-/upper-class women, that is. Everyone else was already working out of necessity.) But giving people the freedom to make a given choice is not the same as forcing them to make that choice. Surely one does not logically follow from the other.

In her Vice article, Allegra Ringo points out that you don’t see feminists fighting for women’s right to stay home with the kids—because that is a right they have historically had (if they were white, as are the overwhelming majority of the women on the WAF Tumblr). She continues:

If you want to talk about a group that has historically voiced support for families, and specifically mothers, of all types—including, yes, stay-at-home moms—we must, I’m sorry to say, talk about feminists. Here’s an incomplete list of mother or family-related issues that feminists have fought for: maternity leave, incarcerated women’s right to give birth without being in shackles, and basic rights for domestic workers.

In an ideal feminist world, there could absolutely still be stay-at-home mothers (and stay-at-home fathers). Except they’d also have access to affordable or free prenatal care and childcare, and their husbands would have paid paternity leave so that they can spend more time with a new baby. (Did you know that 25 countries mandate paid paternity leave, but the United States does not? It’s also the only one out of 39 countries that doesn’t even mandate paid maternity leave.)

If the father loses his job or becomes sick or disabled and unable to work, there would be adequate resources available to help families make it through. In that world, stay-at-home moms would also command as much respect as working dads, because we would know that what they do is every bit as important and vital as working outside the home. Childcare and housekeeping wouldn’t be seen as “women’s work.”

Maybe some perceive feminists as hostile to the idea of stay-at-home motherhood because they warn women of the potential downsides of making that choice. And there are downsides. If your spouse is no longer able to support you, you may face significant difficulty, because many years out of the job market and few personal savings don’t make for excellent career prospects. Women should know the risks of choosing to stop working.

However, that doesn’t mean it’s impossible for a woman to make an informed decision to be a stay-at-home mom. Or to let a guy open the jars and not care about getting stronger. Or wear feminine clothes and makeup, or appreciate attention from men, or anything else that the women of WAF are so convinced that people like me are trying to take away from them.