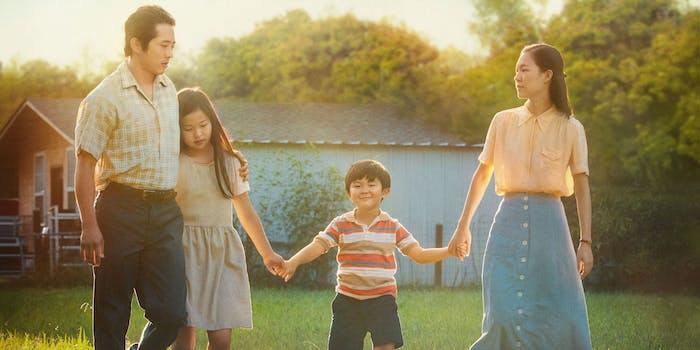 This year's Oscars will recognize a racially diverse slate of nominees.

After years of internal struggle and external pressure, the Academy Awards are truly beginning to recognize a more diverse field of creators. The 2021 nominees include groundbreaking recognition for Nomadland‘s Chloé Zhao (the first woman of color to receive a best director nod), along with more actors of color than ever before. This is also the first time two women directors have been nominated at once: Zhao and Promising Young Woman‘s Emerald Fennell.

At the same time, the 2021 nominees were dominated by a very traditional choice: Mank. As a historical biopic focusing on the Hollywood film industry, this was a predictable choice for the Academy. It received ten nominations including best picture, director (David Fincher), actor (Gary Oldman), and supporting actress (Amanda Seyfried).

Earning critical acclaim throughout 2020, Minari is a low-budget drama about a Korean-American family who start a farm in rural Arkansas. Steven Yeun stars in the lead role, earning a best actor nomination alongside his co-star Youn Yuh-jung (best supporting actress). The film also earned nominations for best picture, director, and original screenplay (Lee Isaac Chung). During the Golden Globes, Minari was the subject of controversy due to its nomination in the foreign-language category, despite being an American film—an implicitly racist choice by the Globes organizers.

The 2021 nominations are arguably the most diverse slate in Academy Awards history, particularly in the acting categories where Riz Ahmed, Chadwick Boseman, Viola Davis, Lakeith Stanfield, and Daniel Kaluuya all received recognition. This comes after years of criticism like the #OscarsSoWhite campaign, with the Academy proactively diversifying its voter base. However, these nominations also highlight other shifts in the Hollywood landscape. In particular, Netflix poured a ton of money into its own campaigns.

Due to the pandemic, a significant number of nominees were streaming releases. But Netflix, with its deep pockets and high-profile titles, definitely won out. Its main Oscar bids were Mank, The Trial of the Chicago 7, Hillbilly Elegy (which earned bad reviews), and Da 5 Bloods. Mank and Chicago 7 are now the clear frontrunners, raising questions about which films Netflix chose to prioritize for Oscar campaigns. Early in the awards season, Delroy Lindo (Da 5 Bloods) was seen as a shoo-in for an acting nomination. But as the public campaigns heated up, Mank and The Trial of the Chicago 7 seemingly took priority. Da 5 Bloods only received one nomination (best original score), with no recognition for Delroy Lindo or Spike Lee—the most prominent Black director in this year’s Oscar race. Regina King (One Night in Miami) and Shaka King (Judas and the Black Messiah) also missed out in the director category.

Every Oscar season arrives with its own controversies and nitpicks about unfairness behind the scenes, but the 2021 slate is largely being received as a positive step. Smaller projects like Minari and Promising Young Woman earned nominations alongside juggernauts like Mank, and the slate wasn’t wholly dominated by conservative choices—an attitude that was predicted, perhaps, by the popularity of Parasite last year.

WATCH NEXT: How ‘Hustlers’ Dresses the Late ’00s