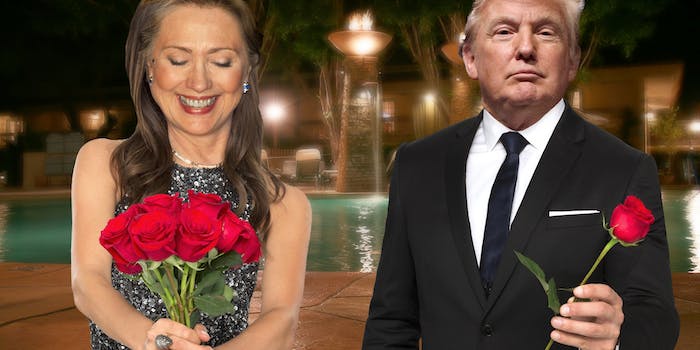 The presidential election is almost as cutthroat as the fight for Ben's heart.

Outrageous comments. Grandstanding. Winners and losers. Are we talking about the 2016 election, or the latest episode of The Bachelor? And who will Ben—and America—choose? Tough to say.

But on Monday night, millions of Americans had to choose between watching the 2016 Iowa caucus results and The Bachelor.

This political season has been so wild that it often seems like we are watching reality TV, and if you really think about it, the path to the White House is a lot like the journey to getting the final rose on The Bachelor. There’s roughly 25 people competing for the same prize, we see them constantly debate about their virtues while wondering how there are so many still left, and most of the candidates seem to have lost their minds.

The process of choosing someone to propose to (or to lead the country) is complicated and contentious. Candidates can be asked to leave at any time. Bachelor Ben Higgins, like the American voters, just wants to make sure they make the right decision. And this year, the contestants themselves are a lot like the field of contenders vying for the White House.

Let’s break it down:

Donald Trump is Olivia. At first, Olivia seemed like maybe she could be a viable candidate, but after a few episodes, she showed her true self and it was scary. Maybe it was creative editing, but Olivia (and Trump) teaches us an important lesson: Everything you say on TV can and will be used against you in the future. In this week’s episode, the gang went to Mexico, of all places, where Ben finally started seeing some “red flags” in their relationship. There’s always that one woman in the house that the other girls don’t like, and they’re starting to speak up. Chris Christie is Lace. She makes a lot of strange statements and you are never sure if she is drunk, or just has no filter. Lace told Ben that she has a “bold personality,” like the New Jersey governor. While she had the self-awareness to bow out of the running, Christie (who got just 1.8 percent of the vote in Iowa) is still in the race for that final rose. Hillary Clinton is Becca. This is not her first rodeo. Maybe this is her time to shine. Or maybe the fire in her heart will burn out before she gets to the finish line…again. Jeb Bush is Lauren B! She seemed like the winner at the beginning, with solid credentials and a good first impression out of the gate. But as the field narrows, is she getting lost in the mess of tears, cankles and bad breath? And in the end, will she prove to be the only sane one of the bunch? Rand Paul is Jennifer. Every time Jennifer comes on the screen, I ask myself who she is. Occasionally, she says something insightful. She seems to be there for the right reasons, but she is not making a big enough splash to be memorable. Jim Gilmore is Jubilee. Like the former Virginia governor, Jubliee wonders if Ben even notices her among all the other girls. Jubilee is also a military veteran, and while you want to cheer for both of them and convince them that they really are “lovable,” they just don’t have what it takes to lead this country, or capture Ben’s heart. Martin O’Malley is Laura. We all knew she wasn’t going to win, but gosh darnit, we liked her gumption. Ben Carson is Lauren H. They both have those Ann Arbor, Michigan, connections, which makes them seem like good wholesome people who you would want to have a nice dinner with, but maybe not make decisions on matters of national security. Ted Cruz is Emily. At first, the whole twin sister thing seemed like a joke, but as the weeks go on (and after Haley went home), Emily began to shine and suddenly seems like a viable option. Carly Fiorina is Caila. She is a business woman who is not afraid to speak her mind, even if you do not agree with her. (But breaking up with your boyfriend to compete for one guy on reality TV may not be the smartest choice.) Mike Huckabee is Amber. We have seen her before. We know her. We also knew right away that she was not going to win. John Kasich is Amanda. Amanda seemed like she was going to be a pushover at first, but when Olivia told her that her life reminded her of an episode of MTV’s Teen Mom, Amanda showed her fiery side and isn’t backing down. Bernie Sanders is Leah. Leah is playing the long game. She is not in Ben’s face, begging for attention, but she is not shy about being loud, voicing her opinion or wearing a clown costume when she needs to.  Also, as the lone member of the Tribe on the show, her and Bernie have something in common. Mazel! Marco Rubio is JoJo. She is not the front runner, but slowly, she is working her way up the ranks and becoming a “dark horse” in the race. Does she have enough steam left to win Ben’s heart? Only time will tell. So America, who do you want to give your final rose to? Choose wisely. And remember, the presidency is a four-year commitment, which is longer than most Bachelor relationships.

Aly Keves is the realtime social editor for the Daily Dot.