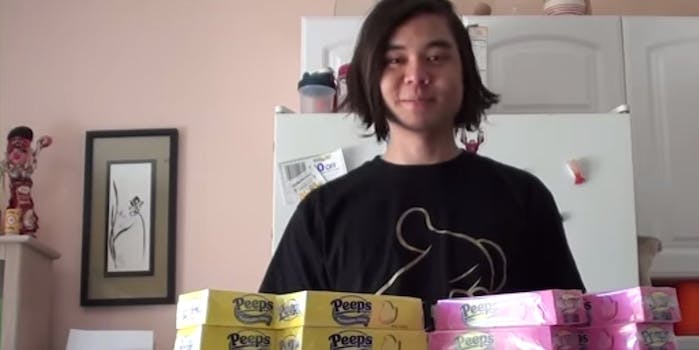 If you can eat it, Matt Stonie can eat more of it. That’s the claim to fame of the of long-locked YouTuber who, over his brief career assaulting his stomach with foodstuffs, has accomplished some extraordinary feats: eating five Big Macs in under a minute, downing a two liter bottle of coke without letting out so much as a burp, and stuffing 120 Chicken McNuggets down into his stretchy acid bag.

For Easter Sunday, Stonie had a special treat in store for his viewers: Peeps, those puffy neon-colored birds that look about as appetizing as a piece of sugar-coated styrofoam.

Stonie explains his motivation at the beginning of the vid, rattling off the names of a few other YouTube power eaters and detailing their Peep casualty count.

“Pat Bertoletti did 30 Peeps in 35 seconds,” he says. “Furious Pete did 60 Peeps in 2 minutes. So naturally, today is the 100 Peep Challenge,” he concludes, calling into question his understanding of nature’s physical laws. “Because Leibniz downed 50 apples yesterday, I must down 100 today” appeared nowhere in the writings of Isaac Newton, at least as far as I know.

Anyway, apparently compelled by this heretofore unknown natural force, Stonie lays into the birds: 50 yellow, 50 pink. They fly into his mouth so fast it’s like his tongue is actually a conveyor belt. If the little guys were to suddenly grow real wings and attempt to escape, there’s still no way they’d escape the black hole this guy secretly hides in his gut.

After about two minutes the whole gruesome ordeal is over, the only sign of the Peeps’ brief existence a smattering of sugar dust on the countertop.