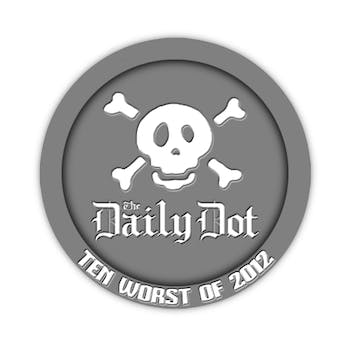 The Hater takes down the celebrities that made the Internet a terrible place in 2012.

Five years ago, Time magazine announced that you were their person of the year.

Labeling the Internet a “cosmic compendium of knowledge,” the magazine cited your playlists on Myspace, false Wikipedia edits, and rewatching of the OMG, Shoes video on YouTube as the reason why you should be awarded the title.

Well, congrats! A half-decade later, you’re still living up to that title by concocting a special blend of insufferability and detestable behavior that is best shamed in a very public manner.

From the torturous “Call Me Maybe” covers that your aunt couldn’t stop emailing you to the despicable tweeting in defense of Chris Brown, it all demands a stink eye and a wag of the finger.

The glorified Holiday Inn Express owner went mental on Twitter during the run-up to the election and hasn’t recovered since (if he was ever right to being with). Trump’s two-million-strong followers were treated to golden trolling against anyone who didn’t agree with him, which was basically everyone to the left of sanity, including NBC’s Brian Williams, Yankees’ third baseman Alex Rodriguez, and Star Jones. Also, let’s not forget his totally methodically planned-out YouTube video aimed at President Obama to get his college transcripts. #ThanksDonald for letting us watch your midlife crisis firsthand. It’s been a treat.

Jepsen, who is an iced maple-flavored latte in human form, trail blazed her way into fame thanks to her cautiously titled breakout single, “Call Me Maybe.” The Justin Bieber-backed single provided a chilled aperitif for our throats, but it’s the deplorable covers suffocating YouTube’s servers that are giving us heartburn. After a cute cover from the Harvard Baseball Team, other groups/teams/so-called “YouTube celebrities” decided it was something they should also replicate. No, all of your covers were terrible. You danced out-of-step, the vocals were pitchy, and you can’t wash a car as cute as Carly can. Cut it out or else you’re just giving the producers from the Today show ammunition to expand the show to five hours.

Brown has just one mode when he tweets, and it’s apparently stuck on stupid. The controversial R&B singer/convicted felon, whose career is propped-up by a group of indolents better known as #TeamBreezy, is no stranger to stupidity. He’s always used his to Twitter slam his haters and bemoan his first-world life, but his imbecility was highlighted in late November. Catching notice of Twitter-famous comedian Jenny Johnson’s barbs against him, he threatened to “shart” on her and then subsequently peaced out of Twitter. Is there way to report Brown for spam and have him deleted for life?

Can I be honest? Sheppard’s masterful creation, @ShitGirlsSay Twitter account scaringly—and accurately—imitated some of the silly things girls (and I!) say on a daily basis. We expressed enthusiasm when its YouTube counterpart appeared. (Also, for doing Juliette Lewis a service by putting her on a series that people actually watched.) But again, YouTube users ruined this for us. The thoughtless imitators made for an aggravating Internet experience. Yes, we get it, your subset of friends can say the goofiest things, but if we’re going to get real here, the meme’s fattening original is so much more tastier than its low-calorie, generic knock-offs. Speaking of, froyo anyone?

I don’t know what the hell you’re sprinkling on your Weetabix, but ya’ll need to chill the hell out. Third-place winners of 2010 season of The X Factor (a show that people actually watch in the U.K.), the British twinks stormed into your brainpans thanks to their catchy hits and stilted dance moves. But it’s the fans that we should be concerned for. Their Tumblr and Twitter-based inquisitions will attempt to strike fear if you diss their coveted “1D” members or discount the fact that Louis and Harry are never, ever, ever getting together. Anyway, where’s the love for the Wanted? They’re British, too!

Big or small, coarse or silky, I love dogs of all shapes or sizes. But not Boo because his stupid little face enrages me. The Paris Hilton of dogs, Boo is an alleged Pomeranian, but I’m convinced that it’s a muppet controlled by our Illuminati overlords to profit off the Internet’s adoration for anything cute. It doesn’t do much except for pose with its terrible SuperCuts haircut and past season outfits. IT DOESN’T EVEN WALK CORRECTLY. OR BARK. Just like Anne Hathaway’s laugh, this is just one of those things that annoys me for an unidentifiable reason. Keep staring at him. His black, beady eyes will anger you too.

By breeding Abba and creating the world’s most frustrating furniture instructions, it shouldn’t be breaking news that Sweden contains a special type of people. The country’s citizen-powered official Twitter not only sounds like a premise for a TED Talk but alarmingly amplified how bored they are over there. @Sweden has alerted me that it contains fewer Jews than a Mitt Romney campaign office, stares at its cows for amusement, and doesn’t find Stephen Colbert as funny as we do. Do we need return Alexander Skarsgard to pep you up?

I never thought I’d say this about the Internet’s most well-defined six pack, but our stock has dipped in regards to Ryan Gosling. Granted, his firmly sculpted shoulders and soothing voice provided us fodder for our single-serving Tumblrs, but sort of like the first half-hour of Drive where no one talks, the Internet has reacted in a similar way toward him. “Hey girl” memes no longer take over our Facebook, and the Tumblrs are now only sparsely updated. And watching him act in an antiquated episode of Are You Afraid of the Dark? doesn’t make us want to throw our iMac with vigor that would have a year ago. Andrew Garfield, are you up for ready to fill the role of being the Internet’s boyfriend, because Gosling is so yesterday?

My little recovering Time magazine Person of the Year winner, you, in particular, have been terrible.I’ll give you pass on those Gotye covers because that’s so late-2011. However, plenty of you gullibly spread Facebook scams around, created horrifically unfunny political parody Twitter accounts, and had a tendency to overuse hashtags when describing your Instagram photos. Also, your sharing BuzzFeed listicles all over my respective news feeds/timelines has become unbearable. Those pictures aren’t that powerful .Grab your phone, take a selfie, look at yourself, and think long-and-hard how you’re going to reverse your ways in 2013. If not, no Internet for you.