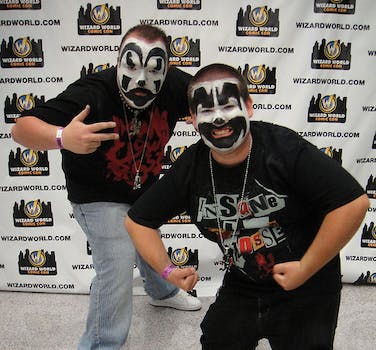 Users of the social news site have had just about enough of Juggalos and Chris Brown's #TeamBreezy.

High emotions, inside jokes, and cultish reverence for one interest above all: When you’re inside a fandom, it’s as if you’ve found your long lost people. But to outsiders, fan enthusiasm and rage can be truly insufferable.

“So, Reddit, in your opinion, what is the absolute WORST fanbase? Doesn’t matter if it’s a band, movie, video game, tv series, internet series.”

Predictably, the backlash from the fandoms mentioned was so fierce that the redditor ended up deleting his or her account. Still the discussion, which outed the inevitable dark side of fandom, remains. According to Reddit, here are the 10 fanbases with the worst reputations.

Another name for fans of the face-painted hip-hop artists Insane Clown Posse, juggalos are best known for their annual Gathering of the Juggalos, an anarchistic music festival with profanity, public nudity, and Faygo abound. Currently, the Insane Clown Posse is suing the FBI for labeling their rowdy fanbase a gang.

“There was this kid in my school who claimed to be a ‘Juggalo.’ He got expelled after he mooned a teacher while shouting, ‘Kiss my ass!’” One_More_Comment wrote.

According to Reddit, if there’s anything young potheads like more than doing drugs, it’s talking about doing drugs.

“Do i really have to hear about every toke you did or how gangster you are because of how you got one of the most mainstream drugs out their [sic]?” Erik_The_Cleric wrote.

The strength of rage faces and image macros is that they let people convey an emotion in a single cartoon. To Reddit, that’s also this communication shortcut’s weakness.

“If I ever hear anyone say ‘le’ or ‘me gusta’ in real life, I am going to run them down with my car, then post it to Reddit for karma,” Chakote wrote.

“Lazy, filthy, highly opinionated on nothing but video games, mysogynistic [sic], homophobic, arrogant, high-ass sense of self entitlement for being all of the above convention going, basement dwelling fuckos,” dizavin wrote.

Redditors can be just as insufferably insidery as any other fandom mentioned here, but even Reddit General Manager Erik Martin has said he finds the “narwhal bacon midnight thing”—a type of verbal redditor ID process—to be more elitist than welcoming.

“Three years ago I loved to share that I was a redditor because it was still an interesting, small community,” RapedByASegway wrote. “Nowadays, it’s sort of like sharing I’m on facebook. No one cares.”

At its worst, this fandom is characterized by unwanted hugs or “glomps,” high-pitched squeals, or “squees” of approval, and people of every ethnicity wanting to be Japanese.

“Oh god, I love anime, but most anime fans are just so goddamn annoying,” ardbob wrote. “Constantly doing weird dances in public, girls trying to talk in an high-pitched anime voice, and everyone constantly shouting ‘baka.’”

Any tech product that prompts people to camp out for days before its release is bound to inspire some passionate apostles. They have a reputation, as actualscientist points out, of being “smug, arrogant, technologically incompetent, fiscally irresponsible, and ‘in your face.’”

In popular culture, Chris Brown is best known as the Grammy-winning singer who beat up his then-girlfriend, R&B star Rihanna. But to his thousands of militant teenage fans on Twitter’s #TeamBreezy hashtag, he is a godlike figure whose worst crimes are worth defending.

“Teaching a generation of teeny boppers that domestic violence is OK [if] you win a grammy,” murphmurphy wrote.

Even in the most obnoxious fandom, at least fans have their passion and positivity to redeem them. Not so with people who unite around their mutual hatred of a fandom.

“What annoys me the most is the anti-fanbases,” dinoswithjetpacks wrote. “People glorifying the fact that they DON’T like something that’s popular. The worst offenders are the anti-twilight and anti-justin bieber crowds. Wow, you’re a mid-20s male who doesn’t like something designed for high-school girls? you must have such discerning tastes.”

Needless to say, redditors came up with far more than 10 despicable fanbases. Dozens of people wrote they’d had a run-in with a maladjusted fan. But indigoire asserted that you can’t judge a fanbase by its worst fan:

“Every fanbase is the worst fanbase, because every fanbase has the worst fans. People are passionate about what they like, and go out of their way to let others know that they like it. They band with like-minded individuals and make other fans feel like crap. Young fans are especially bad at knowing when it is appropriate to proclaim their love for something. This is everywhere. It’s not unique to one fandom, or one genre of media, or anything. There will always be stupid fans in fandoms.”

It’s something for redditors to digest while waiting for the same discussion to roll around again next month.