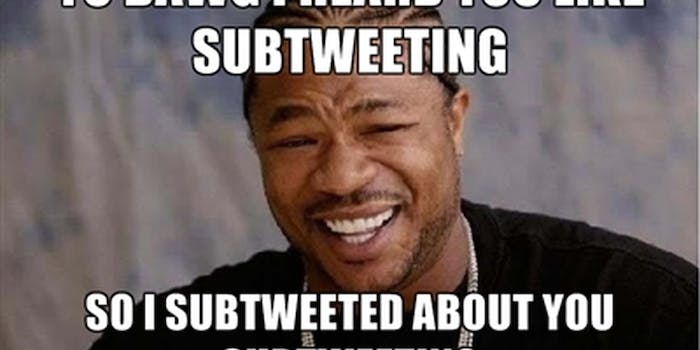 YOLO: What is a subtweet?

Ever getting the feeling that someone is talking behind your back on Twitter? That's a subtweet—only not.

You know that all-too-familiar feeling that someone’s talking about you behind your back? Your ears are burning, colloquially, but what if people are talking about you online? Does that mean your typing digits itch? You feel your trackpad giving you a ghostly shock?

When I discovered what “subtweeting” was, that was my immediate reaction. That more people were talking about me, and in more places.

Subtweeting, according to Urban Dictionary (sadly, it has not entered into our official vernacular just yet), is defined as “directly referring to a particular person without mentioning their name or directly mentioning them.”

“Basically,” Urban Dictionary user SubUrbanBruh adds, “it’s talking about someone behind their back but sort of in their face on Twitter!”

It’s not as simple as that. I’ve done my research, and there are a plethora of possible subtweet failures. Here, blogger The Write Edition, brilliantly spells out the “subsequent twists and turns” of a subtweet:

Wait, what does this even mean.

“She subtweets him during twitter after dark assuming he’s gone to sleep, he sees it and mentions her. she mutes him, he blocks her.”

“You say you hate subtweeters yet you are actually subtweeting about it. guess I’m also subtweeting?”

“You send group subtweets and they tend to believe you are talking about them. You get yourself in trouble and in the process you confuse yourself with the multi subtweets.”

“Reading people’s tweets, a thought is inspired and he tweets about. She however insinuates that he’s subtweeting her.”

“She has 6 and 1/2 followers, she follows 11 people and thinks it’s too hard for people to figure out who she is subtweeting.”

HOW DO YOU HAVE 6.5 FOLLOWERS

“You subtweet all day about how corny a certain someone is, yet everybody knows the person doesn’t exist!”

“She subtweets someone but deletes it straight after. People see it but it’s gone. Do they really see it? why delete?”

Sorry, I am still confused. I hope everyone realizes that this is literally the most upsetting technological future we could’ve imagined. Mean Girls (“You can’t sit with us!” etc.) is actualizing in our Twitter, and there’s nothing we can do to stop it.

There are people out there just talking about you, and all you can do is stand by, silently, and “favorite” their tweets. At least in high school you could throw strawberry milk in your subtweeter’s face.