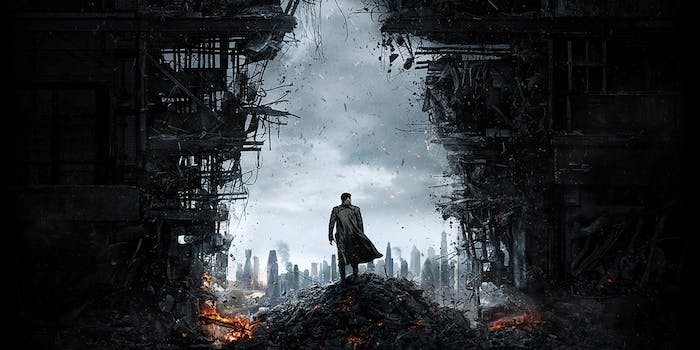 Should the "Into" in Star Trek Into Darkness be capitalized? Wikipedia editors have written 40,000 words on each side of the argument.

Case in point: The Wikipedia talk page for the new movie Star Trek Into Darkness. There, Wikipedians and Wikipedia Star Trek fans have engaged in a heated conflict that’s raged for nearly two months. In total, more than 40,000 words have been lobbed in the fight. Earlier today, the debate was even the subject of a mocking cartoon at the popular Web comic XKCD.

The point of contention? Whether “Into” should be capitalized in the movie’s name.

The new film is the second installment in the series to be directed by J.J. Abrams, the guy behind hit shows Lost and Fringe, among others, and a master of both suspense and the art of cleverly hiding secret messages. For hardcore Lost fans, half of the show’s fun was delving into the easter eggs and hidden plot points the producers scattered throughout every episode. So perhaps Abrams knew what he was getting into when he gave his film such a grammatically bizarre title.

Note two key things about the name: First, the “I” in “into” is capitalized. (According to Wikipedia’s own style guide, prepositions of four letters or less are never capitalized.) Second, there’s no colon that would indicate “Into Darkness” is a subtitle, i.e., a secondary title to “Star Trek.” In every preceding Star Trek movie, the subtitle was indicated with a colon. So, for instance, you had Star Trek II: Wrath of Khan instead of Star Trek II Wrath of Khan.

We won’t force you to experience excruciating detail the main arguments from both sides. They are exhaustive and pedantic to such an extent that “pedantic” no longer seems a suitable adjective. Thankfully, for those who don’t want to spend the next three years reading through each twist and turn in the debate, Wikipedian Frungi has compiled a helpful summary of the main thrust of each side’s arguments.

“Arguments for the lowercase I

Arguments for the uppercase I

You may have noticed we’ve stuck to consistent capitalization throughout this story. That’s because we agree with the sentiment of an anonymous Wikipedian who created this passionate piece of vandalism at the top of the talk page earlier today:

Paramount consistently titles the film with a capital “I.” It’s Star Trek Into Darkness. It’s not a marketing ploy. Marketers have much better ways to promote a movie than to play around with naming conventions. And besides, Star Trek into Darkness simply does not make grammatical sense. Star Trek is a noun—a thing, not an action. You cannot “Star trek into” anything.

So Star Trek Into Darkness is the movie’s official name. That’s it. End of story.

But not at Wikipedia. No, there users have reached a compromise. A way to please everyone and no one—and at the same time make the encyclopedia look rather ridiculous.

The first line of the entry now reads:

A shining moment in the history of crowdsourcing, if there ever was one.