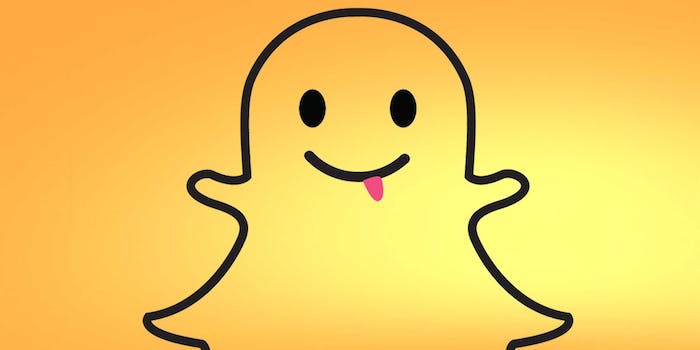 The frighteningly easy way people can save your Snapchat photos

According to a new YouTube video, all you have to do is hold down the home button to discreetly save a Snapchat photo.

By now you should know Snapchat is not to be the fool-proof sexting app we all hoped it would be.

The texting app was supposed to be a discreet way to share photos that were immediately deleted upon viewing. While users can take screenshots, the app allows the sender to see if the recipient has saved his or her photo.

However, as shown in the following YouTube video, a user can easily circumvent this by holding down the home button while taking a screenshot.

If a user does this, the sender is not alerted to the fact that the recipient saved the photo.

In fact, a new site, Snapchat Leaked, has been collecting photos such photos. Some are just embarrassing funny faces or weird outfits, but most are sexual in nature—featuring breasts, butts, and semen. On the site, the photos are categorized into sections like “Men,” “Women,” “Bathroom,” “Bedroom,” “Sexy,” and “Ugly.”

The saved photos are also being shared on Twitter at @Snapchatleakoff. They were being shared on Facebook until the social network banned the Snapchat Leaked page for violating their terms and conditions regarding bullying, according to the founders of Snapchat Leaked. The site then created a second Facebook page, called SnapChats Leaked Pics, which has not yet been pulled down. The page has more than 10,000 likes in less than two days.

The site could face legal action for posting peoples’ presumably private photos, or inspire Snapchat to fix this latest security loophole. In the meantime… yikes!