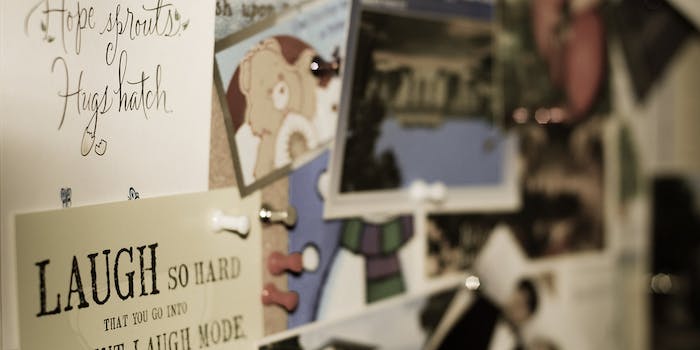 Sometimes "snail mail" can arrive at just the right moment.

He had just four hours to get the site’s famously charitable users to notice his uncle, Scott Widak, a 47-year-old man with Down syndrome who was dying from liver disease. Widak loved getting letters in the mail. O’Connor was hoping Reddit might make his day.

“Anyone feel like sending him a letter or card?” O’Connor asked in an r/askreddit thread on March 29.

Four hours later, the thread disappeared, deleted by Reddit moderators. The site has a strict policy against revealing personal information, even when it’s for a good cause.

But that short window proved long enough. Widak soon began receiving piles of postcards and letters from around the world: the United States, Finland, Australia, and Japan.

“The mail that’s arrived has all been extremely positive and thoughtful,” O’Connor told Mashable’s Christine Erickson.

“My family and I are amazed at how so many strangers could come together for a random act of kindness.”

In the short-lived Reddit thread, O’Connor had made sure to tell redditors about Widak’s obsession with country legend Johnny Cash. Since the site receives more than 35 million unique visitors a month, maybe someone could think of something special?

At the time, redditor erdle claimed to freelance at Sony Music. “I’ll see what Johnny Cash stuff we can send out,” he or she wrote.

The redditor was able to dig up a lot, apparently. Included in the truckload of postcards and letters that Widak received were 15 CDs and DVDs from Sony Music, most of them by Johnny Cash.