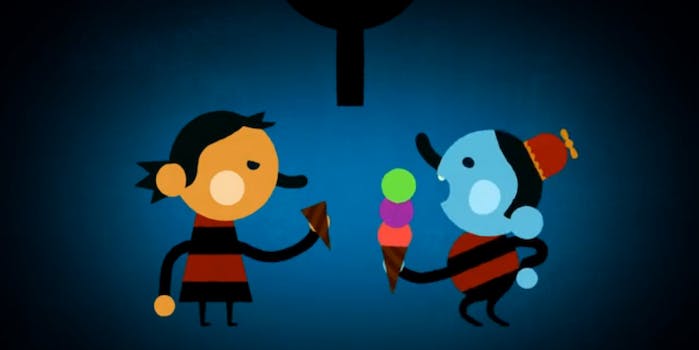 Benson's 40-second "But I'm a Nice Guy" paints an ironic picture of the men's rights movement as a tantrum-throwing bully.

It’s never easy, ever, to create a “quick editorial cartoon about the intersection of self-pity, entitlement, rape, territoriality, misogyny and fear of women.” But when animator Scott Benson set out to do just that after spending some time following the antics of the so-called men’s rights activists (MRAs), he found himself creating a short, pithy cartoon that predicted its own response.

Benson’s 40-second cartoon, “But I’m a Nice Guy,” paints an ironic picture of the men’s rights movement as a tantrum-throwing stock bully who’s infuriated because a girl tried to have some ice cream for herself. It also features some prominent lines and catchphrases from the MRAs, such as “feminazis” and “take the red pill,” a reference to the Matrix and Reddit‘s subforum, The Red Pill.

Above all, the refrain is one of fear. On his Vimeo account, Benson elaborates:

Sometime in the three days since the video went up, Benson had to disable comments because of vitriol—or, as he put it, “BECAUSE OF INTERNET, YOU KNOW HOW IT IS.” In this case, “how it is” is the deplorably predictable state wherein angry MRAs have turned trolling the comments and platforms of anyone they don’t like into a veritable art form. This, too, Benson addressed on his Tumblr, which was allegedly also bombarded with angry feedback:

It’s an unfortunate fact that the MRM’s loudest faction ARE extremely antagonistic toward women and dismissive of the real, long-standing institutional chauvinism and misogyny you see in everything from the Bible that enshrined women as virginal property / temptress whores to the Constitution which did not extend to them the right to vote… And until someone comes up with something better, Feminism is the only game in town really fighting the fight to figure this shit out. If MRA want to take up that mantle, they had best start weeding out the trolls and misogynists before they ask anyone to take them seriously. Because they’ve got more of the latter than the former.

Benson is quick to point out that his video is satire, a parody look at serious issues. Still, he adds, “If this vid is close enough to an actual person/idea to be a strawman, maybe that says more about the person and their ideas than my terrible illogical awfulness.”

As a commenter on MRA watch blog Manboobz notes, Benson argues, “this video DOES address men’s issues. Men are hurting themselves with this reactionary, angry, fearful shit.”

But at The Red Pill (which refers to the act of “waking up” to the damage that MRAs believe feminism has caused in society), the few Redditors who commented felt the video was “childish” and unclear.

“There are some in the MRA/MGTOW who are afraid of women,” said ThomasWaldemann:

And with good cause: false accusations and divorce can be life destroying situations for weak men… I don’t think anyone here believes they are hurting themselves by improving their bodies, their minds and their ability to pick up random women… In the end, do what makes you happy. No one here should be a nice guy anymore, anyway.

Or at least your ice cream.