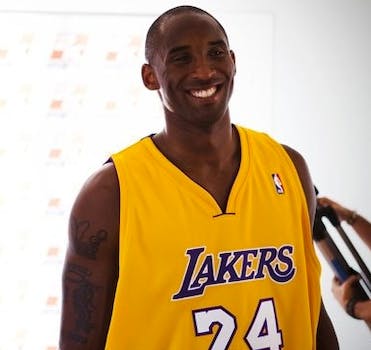 On the 7th anniversary of his historic 81-point game, Kobe Bryant watched (and livetweeted) the whole 2-hour event.

Seven years ago today, a self-indulgent shooting guard named Kobe Bean Bryant hiked up his shorts and laced up his Nikes and walked out onto the Los Angeles Lakers’ Staples Center hard court and proceeded to score 81 points in a 48-minute basketball game.

Fast forward to today, and Kobe’s Lakers aren’t doing so hot. In the news all offseason for picking up such marquee players as Steve Nash and Dwight Howard, the star-studded team has crawled out of the season’s gate and now lays claim to a 17-24 record.

A last-minute playoff berth hangs in the balance, the Lakers have more than a ways to go before they’re considered a “winning team,” and Kobe is starting to get pissed off. Last night, he tweeted what can only be considered the ultimate emo subtweet towards his teammates and coaches and medical training staff: a photograph that finds him hatted, scarved, and noodling around Beethoven’s “Moonlight Sonata” on a piano. 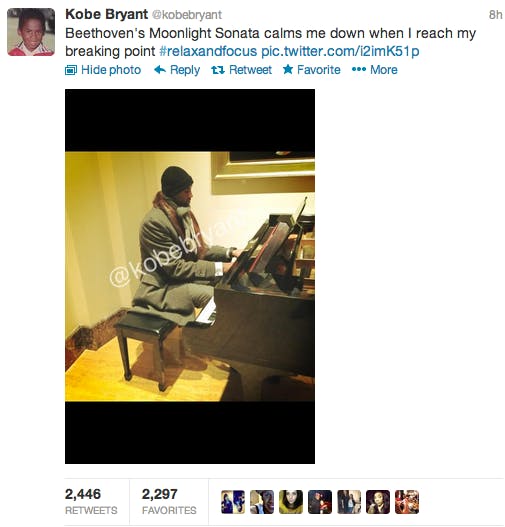 Desperate for a fix and in need of some positive vibes, the great Kobe announced through Nike Basketball’s Twitter account that he’d celebrate the 7-year anniversary of his 81-point performance by watching said 81-point performance on the television and live-tweeting his reaction to the whole melee.

The festivities started at 4pm ET and continued on until Kobe watched the final whistle blow—2 hours and 22 minutes, 81 points, 6 rebounds, and, not surprisingly, only 2 assists later.