Bullied teen gets support—from all corners

Jonah Mowry tears up in front of the camera, relating how he's been bullied. His story hit a nerve, and people from all corners have jumped into help. The Internet came to the rescue of Jonah Mowry, a bullied 14-year-old, over the weekend.

Mowry posted a heart-wrenching video three months ago describing his sadness and daily bullying, but his video didn’t go viral until it was posted  on social news site Reddit.

Mowry doesn’t speak. Instead, he communicates with flash cards while he unsuccessfully holds back streams of tears.

Following the lead of the reddit thread titled “Reddit, let’s make this kids day and give him support,” which was posted yesterday, hundreds of people took to leaving heartfelt comments on Mowry’s video every minute on Sunday night.

The video was quickly picked up by various outlets, including  International Business Times, Gawker, and the Huffington Post. It also spread across Twitter and Facebook. As Perez Hilton noted though, Mowry is okay and communicated directly with Perez Hilton through a video posted Saturday. (He speaks in this one.)

Hilton reported people at his site been chatting with Mowry through direct messages on Twitter. Mowry “is so touched by all the love being sent his way,” he wrote. “He tells us he is truly in a much better place. Happier and with friends that care! Plus, he is also getting some counseling – something we’d recommend to anyone going through difficult times.”

Mowry even posted a response video to the massive amounts of love but quickly removed it.

On Twitter, Mowry posted a photo of himself thanking everyone for their support, tweeted that he was recognized in a 7-Eleven, and changed his profile to read:

“hi im jonah mowry i made the video. im 14 and gay and i used to get made fun of day in and day out and im so thankful for what is happening to me”

Celebrities have taken to tweeting their support at Mowry, including Ricky Martin and Rosie O’Donnell, leading Mowry to have periodic all-caps Twitter freakouts—of happiness.

Mowry follows a long line of gay teens who have turned to the Internet to share their stories of being bullied. In October, redditors came to the defense of another bullied gay teen. And in a sadder story, in September, many—including Lady Gaga—called for changes in light of the suicide of a 14-year-old boy.

There’s also been a worldwide movement to support bullied teens with the It Gets Better project, in which people (including President Obama) have recorded thousands of videos telling kids that it does, in fact, get better. 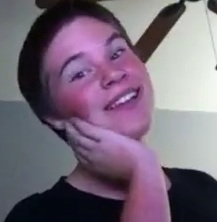