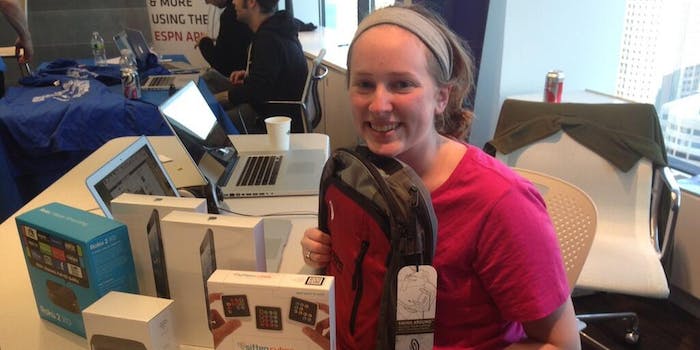 Developer Jenny Lamere won a hackathon with Twivo, her app for blocking tweets about TV episodes you haven't seen yet.

Thank the old gods and the new that a bright young developer has come up with a way to keep Game of Thrones spoilers off your feed until you actually have time to sit down and watch the latest episode.

What’s especially great is that this tool, a Google Chrome extension called Twivo, is not the brainchild of a well-paid team of developers. Instead, it was created by a 17-year-old girl named Jennie Lamere at a hackathon. What’s more, she was the only female to present a project from around 80 attendees, and the only one to offer a solo project. She won the grand prize.

Lamere, a high school senior from Nashua, N.H., took part in the TVnext Hack event in Boston on April 27. An event spokesman told Mother Jones that while he believed other women took part, no others offered a completed project.

One issue when it comes to avoiding spoilers on Twitter is that of context. Filtering out mentions of Game of Thrones or #gameofthrones on TweetDeck is relatively simple. But it’s much harder to account for people excitedly tweeting about a character’s death or other major event. For those who use Twitter’s website, there’s no clear way to filter out tweets you might not want to see.

Lamere is trying to fix that by blocking out the names of characters from your feed.

She cooked up the idea the night before the event, and it took her 10 hours to create Twivo. You can type in the words you want to block and set a timer for your filter. Lamere told Mother Jones Twivo is still in demo format and needs a couple more weeks’ work before release. However, a tech company called Furious Minds has already offered to help her market the app.

She won the sub-category, “best use of sync-to-broadcast,” along with the Best in Show title to earn her goodies like iPad minis and an Apple TV. Lamere even beat out teams sent by sponsors of the hackathon, including ESPN, Klout, and the Echo Nest, where her dad is director of developer platform.

After graduation, the teen will enroll at the Rochester Institute of Technology, and plans to major in software engineering. She eventually hopes to work for Google.

In the short term, Lamere’s focus is on finals and finishing up Twivo. Perhaps she will find a way to allow users to block all keywords associated with a show by clicking a single button; needing to manually enter terms you wish to block is cumbersome and you might miss a few relevant phrases, causing you to accidentally see a spoiler in your feed.

Nevertheless, Lamere’s creating a tool that could prove invaluable to TV fans and even those who can’t make it to a big movie on opening weekend. Spoilers might be the worst, but Lamere’s certainly the best in class.