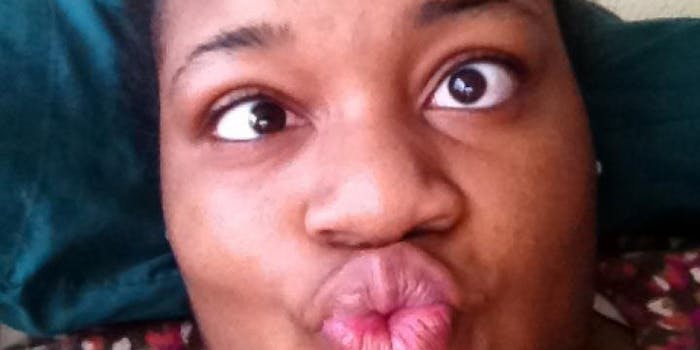 There's dumb, and then there's taking an iPad that doesn't belong to you and accidentally uploading scores of silly self-portraits to the the original owner's phone.

There’s dumb, and then there’s taking an iPad that doesn’t belong to you and accidentally uploading scores of silly self-portraits to the the original owner’s phone.

But “Ugly McCrazy Shirt“—as the iPad’s owner dubbed the apparent thief—is accused of just that.

Allen Engstrom claims his iPad went missing on a flight in February, and had no idea of its whereabouts. But he uses Photo Stream, which means that a photo taken on any of his devices shows up on all of them. The woman he says is now in possession of his iPad doesn’t know that, though. Soon, Engstrom was flooded with pictures of the woman in various poses—alternately cross eyed, duck faced, and smug. “It’s been a continuing fountain of entertainment for me,” he told THV 11, a local news station. “I’ll wake up in the morning and look at my pictures and there’ll be new pictures there. I’ll be like, ‘oh my God, she has no idea.'”

Engstrom said his name and contact info are on the back of the iPad, so there’s little chance this is a simple misunderstanding. He added that while he hasn’t filed charges yet, he likely will once “Shirt” has been identified.

H/T Get Off My Internets | Photo via Allen Engstrom/Facebook