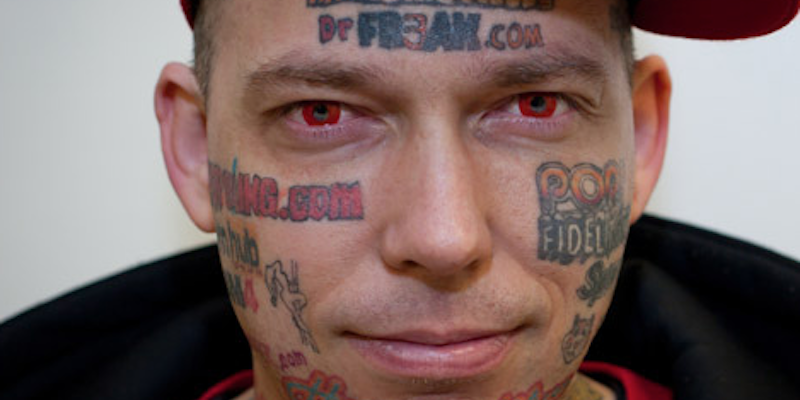 He got URLs tatted all over his body for money, and now he wants them gone.

32-year-old Hostgator Dotcom, né Billy Gibby (he sold his name, too), is a local legend in his native Anchorage, Alaska, where he lives with his wife and five kids. He’s recognizable anywhere, because he has a face that’s unlike anybody else’s in town: a face that over the past 10 years has been covered by URLS belonging to sleazy-looking websites. 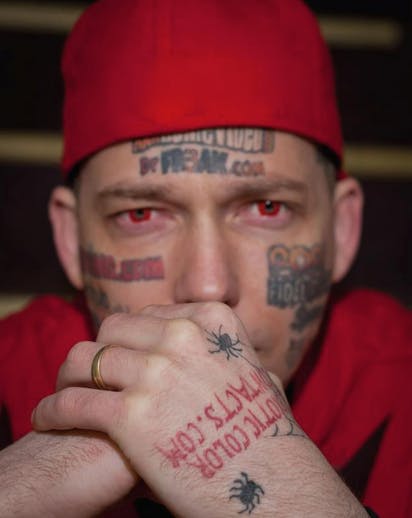 His arms and legs are tattooed as well. At the beginning of all this, he sold his entire back to an online casino for $10,000.

Dotcom says he tagged himself so excessively because he was sick. Dotcom suffers from bipolar disorder.

“There were times I wanted to get help, but I thought I was just being weak mentally,” he told the Anchorage Press in December. “I’d think ‘I can’t be a wuss.'” So he’d bury himself in cheap advertising offers, eventually seeing his rate plummet from $10,000 to $75.

Today, with a firm hand on his illness, Dotcom wants to wipe the slate clean.

“I’m trying to get rid of the ones on my face,” he told the Huffington Post. “I regret them because I only did them because of my mental illness.”

In the last few months, Dotcom has met with tattoo removal specialists around Alaska and learned that it would cost around $4,000 to remove the myriad tattoos that currently appear on his face. What’s more, those removals would have to come in the form of 18 different treatments all spaced two months apart.

Dotcom said that he won’t accept any political ads or ads with racist connotations, but that he has plenty of real estate for tagging.

There’s one place he won’t go, however: his still-untouched pelvic region.

Time to start a Kickstarter.