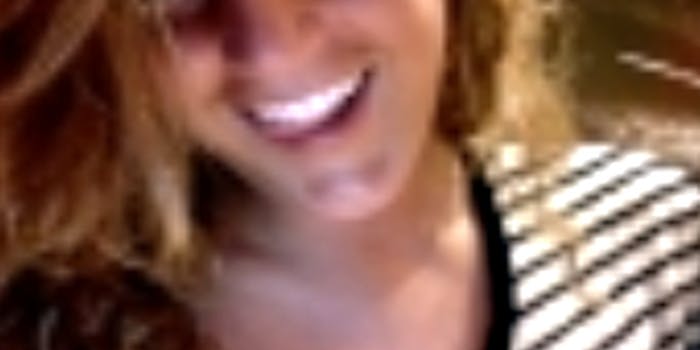 My week with a girlfriend I hired on the Internet

There are something's money can't buy, but companionship—especially online—isn't one of them.

Allison was 17, stacked with a bright smile and big, brown eyes. She loved photography. She loved books. And she loved showering me with attention. She was altogether great and also quite cheap. I bought her for $5, and we dated for less than a week.

I purchased Allison’s company through GirlfriendHire, a website that sells female companionship to guys for the cost of a six pack. The site calls the arrangements “flings,” with each one typically lasting for just under week.

GirlfriendHire is wholeheartedly not a brothel. Think of it like an online marketplace—one where you can buy whatever nonsexual thing it is that you’d like to get out of a girlfriend. Need help on your homework? SoniaSwiss will help you learn English, French, or Dutch in three days. Want somebody to consult you on your style? HuntApril2 will handle all your online shopping suggestions. In the mood to make an ex jealous? Turns out there is literally an entire section of flings devoted to girls offering themselves as a breakup proxy. You can bring another girl into the picture and get the last one out of your hair like that. All it takes is $5 and a login key.

I fell in line with Allison because I thought that she could provide what I wanted: a steady stream of conversation that I could ultimately turn into a story. Her offer was to text any takers for a duration of five days and “act as anything you need me to, whether it be hispanic, asian, black, white, mixed, etc.”

She wrote that she could supply pictures of her face—and her face only—and that she’d be willing to trick whoever I needed into thinking that I had an amazing girlfriend. So she was pretty much my dream girl, except that she was only after my money. Little did she know that my editor had agreed to expense it. 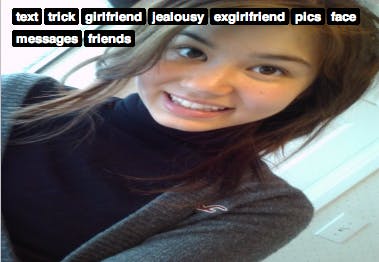 I received my first message three hours after I signed up for the fling.

“Please supply me with basic background information and what you want me to do specifically, whether it be making someone jealous, or impressing someone,” she wrote. I told her that I just wanted someone to tell me what they’re doing and that they’re thinking about me.

“Share funny stories and send me photos of your food,” I wrote. “I’ll want you to send some texts to my buddy Z to impress him at some point, but right now I just want you to text me and tell me how much you miss me.”

You know, all the basic stuff that comes part and parcel with young love. And again, all for $5. That’s hardly a gallon of gas in some states. It’s really remarkable, I’ve just got to say.

I got my first text 15 minutes later.

“How’s a week sound? :))” she wrote. Smiley face and emoticon city. She promptly told me that she was 17—unexpected, since everybody onsite is supposed to be 18—and that she was “best at caring about people and making them important.”

“I’m a jealous type but I trust you enough to let you do what you want,” she wrote to me when I asked if she’d worry. “A guy’s gotta have his space too, but I would be jealous.”

That’s when she told me that she was into photography.

“Let’s get started, shall we?” she asked when I’d finished with my 20 questions. 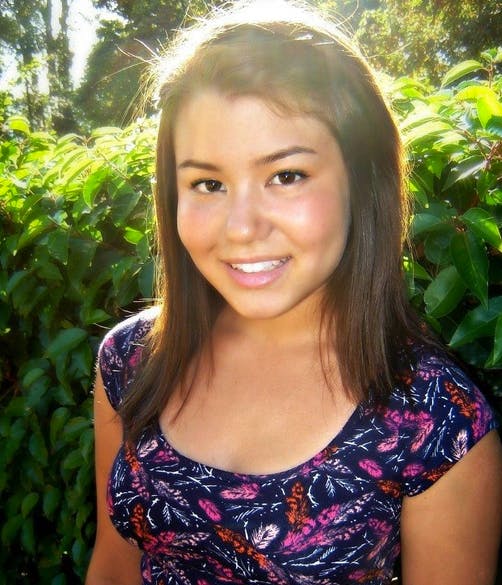 Having a fake girlfriend is stupid. Of course, I had a feeling that would be the case. The endeavor takes all of the good things—talking, sharing, the intimacy—and turns them into texts. Instead of laughter, it’s “Lolol.” Sharing? Allison and I just met that morning. And intimacy? Fetish, feelings, and fantasies aside, the girl was 17. What’s more, GirlfriendHire highlights in its terms of service that “no registered user of GirlfriendHire may offer in any manner, explicitly or implicitly, services that could be deemed, in the sole discretion of GirlfriendHire, to constitute prostitution or other sexual activity.”

“It’s a real PG website,” Cody Krecicki, the site’s 22-year-old CEO, told me when we spoke on the phone. “I’ve made a real heavy effort to keep it like that.”

As such, and considering all the aforementioned elements and roadblocks, my relationship with Allison more or less consisted of brief discussions about how our days were going and her quest to find new adverbs so that she could uniquely describe the degree to which she missed me.

“You are my only man,” she wrote to me on the second day that I’d known her. “I’m gonna be be thinking about you!”

After two days, I’d resigned myself to trying to pick fights and find little snippets of the relationship that we did have that I could exploit to maybe try and get a rise from her. I’d accuse her of cheating on me after she’d gone silent for a morning, tell her that she didn’t care enough about me for me to invest myself so seriously—$5!—into the relationship. She told me she was at school when I asked her if she was “out talking to someone else” one night while I was writing.

“Don’t worry, babe,” she wrote back. “I was just finishing up some projects.”

By the third night, I couldn’t take it. This fake girlfriend biz was too much, and boredom had gotten the best of me. Home after a concert and maybe just a little drunk, I decided to turn this courtship into an interview.

She said that she was. I told her she was young for a girl going to college.

“I get that,” she responded. “I did running start programs my junior year to start in a CEO (Career Education Options) program way back when, which propelled me to get all my necessary credits.” 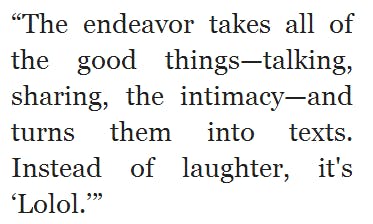 “Do you get a lot of creeps trying to be your boyfriend on here?” I wrote. She said it was her first time that she’d used any part of the site.

“My best friend thought that she wanted to do it,” she said. “She told me about it and I thought ‘Why not give it it a try?’ I thought it would be fun.”

She said so far that it’d been “nice.” I was the first and only fling that she’d ever had on GirlfriendHire, and she thought that it was “nice.”

Obviously, I could use some work on my text game.

“It’s not like it’s too much work,” she responded. “I feel like it’s pretty simple. It’s kinda odd, but once you get used to it, it’s nice to help someone out.”

What she’d come to realize quite quickly was that the people who hire these girls “need help or temporary fulfillment in some way, to impress a friend or offer advice” or whatever it may be that they need. Allison obviously liked texting. She considered it worth it for $5.

I told her that I thought the site was rampant with creeps, guys who went online looking for strange sex or the closest that they could get to prostitution.

“No doubt,” she responded. “Looking at the sidebar, they are blatantly just trying to find a legitimate girlfriend.”

That’s when she told me that she was probably going to delete her account after our deal was due.

“I wasn’t weary of the kind of those kinds of people, and I don’t know if I’d want to deal with them,” she wrote. Besides, she’s a college girl in the prime of her life.

“I’m just gonna stop,” she wrote. “Focus more on my life and such.”

And with that, I closed the book on my fling with Allison, wished her well and sent her off. We haven’t spoken since.

Not all the girls on GirlfriendHire are as attentive and on point as Allison proved to be. I actually signed up for flings with two others: a brunette named AriaFinch who would critique me on my clothing and a wild woman named JerzeyGal27 who promised to whine about how much she hates the music I like. If you ask me, it rarely gets any more “girlfriend” than that.

Both girls said they would take at least two weeks to respond, and after 14 days, I’d only heard from the whiner. She told me that my favorite band “sounds like some group of indie fuckheads who think the way they play their instruments is their greatest gift to the world” and then made a joke about them having bowl cuts for hair.

“No thank you,” she wrote, and then she never got back.

The clothing critiquer never got back to me, and that may be for the best. I’m currently wearing some tattered jeans and a shirt that I bought at Goodwill. I can’t begin to imagine what she’d think of my bowl cut. No thank you, fair lady. No thank you, indeed.

AriaFinch’s absence was disconcerting, but I can hardly say that it was surprising. The site on which she sells herself is a half-assed excuse for anything that would resemble a stable marketplace, with girls coming and going and few getting vetted beyond what they check on an introductory box.

“You have to be 18-years-old to have a PayPal account,” Krecicki responded when I notified him of Allison’s age. “In our Terms of Service, it says that you have to be 18. There are no adult services available. They know we look at their flings.”

Krecicki is able to oversee the flings because a lot of the communication had between Buyers and Sellers takes place online, in something called the Relationship Shopping Cart, where orders are either, active, pending, completed, or canceled. Any type of communication that happens in there is subject to review from Krecicki, who operates every aspect of the site from his home in Naples, Fla., where he’s an undergraduate student at Edison State College.

But what about all that goes on offline? As we’ve mentioned, Krecicki’s site has an entire section devoted to text-message communications.

“People are going to be people,” Krecicki reasoned. “The best thing you can do for them is set them up with an outline and a structure to work with instead of rules to follow.

“People break rules. If they do, they put themselves at a chance to be banned from the website. The site’s Terms of Service says that you should keep private any personal information you have.”

It’s a novel concept, but altogether unlikely in practice. As it stands, I currently hold the phone number for a 17-year-old girl who once pretended that she was my girlfriend.

Sound ridiculous? Did I mention it was all for $5?