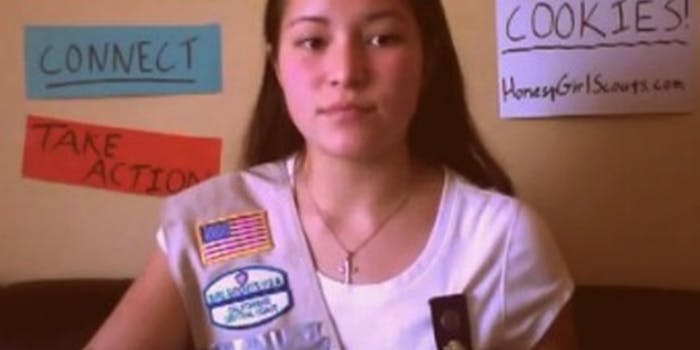 This Girl Scout thinks it's wrong for her organization to allow transgender children to join. Many disagree with her.

One former California Girl Scout is calling for a boycott of Girl Scout cookies. Why?

Because the Girl Scout USA admits transgender girls, and this apparently makes for an “unsafe” and “dangerous” environment.

In an 8-minute video uploaded onto the YouTube channel HonestGirlScout on January 3, a young woman, identified only as Taylor,  looks as if she is reading off camera as she cites news articles and policy statements related to transgender people being admitted to the Girl Scouts.

“GSUSA cares more about promoting the desires of a small handful of people then it does for my safety, the safety of my friends, and they are doing it with money we earned for them from Girl Scout cookies,” she said.

She does not specifically explain why “transgender boys” (proper terminology would be “transgender girls”) are dangerous and imperil the safety of others, except mentioning in a comment that girls shower and undress together. (Viewers took exception.)

“I am asking you to take action with me, and boycott Girl Scout cookies. I ask all fellow Girl Scouts who want a true, all girl experience, not to sell any cookies, until GSUSA addresses our concerns.”

The young woman states Girl Scouts is supposed to be “an environment that is not only nurturing and sensitive to girls’ needs, but also safe for girls,” which is negated by the admittance of transgender girls.

The video appears to be in response to the admittance of a seven-year-old transgender girl in Colorado Springs in the fall.

The video has received considerable press in the last 24 hours, including the Washington Post, the Huffington Post, and Jezebel, which called it “Stepford-esque.”

Since the media picked up Taylor’s video, she has disabled the comments on her video, as Internet citizens were taking her to task, calling her “brainwashed,” “bigotted” and “ignorant.”

In one comment, she wrote “we believe Girl Scouts is for biological girls,” and “Safety of 2.8 million girls takes precedence over the needs of a handful of boys with special mental struggles.”

In the MediaMattersMinute video titled “Angry Bloggers Threaten to Boycott Girl Scout Cookies,” Taylor commented since the Girl Scouts were “hiding” transgender people without alerting other members, this was proof that “transgender boys” are “potentially dangerous.”

“@HonestGirlScouts In what way are BOYS inherently ‘dangerous’? That’s sexist and insulting to assume﻿ that someone is dangerous just because they’re a boy. What a sexist little twerp you are” wrote adaveen on the video titled  “Angry Bloggers Threaten to Boycott Girl Scout Cookies.”

Since Taylor’s video was uploaded, she has gathered very little support for her boycott. It remains to be seen if this will in fact lead to any policy changes favorably to Taylor.

Giving the public backlash, it might work the other way around.