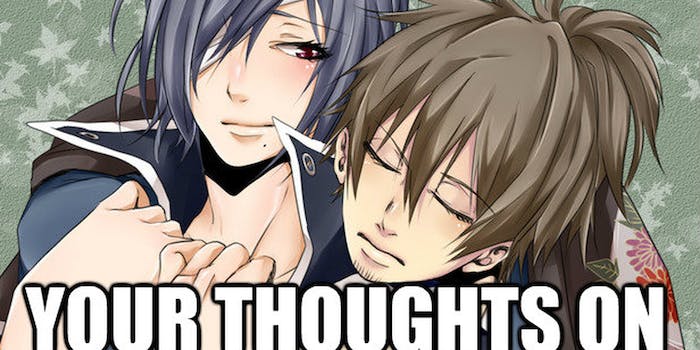 Fandom_Wank has been the Internet's best source of fandom drama for 10 years.

Don’t be put off by Fandom_Wank’s rather dubious name. By its own definition, this popular community is dedicated to “Self-aggrandizing posturing. Fannish absurdities. Circular ego-stroking. Endless flamewars.”

In other words, it’s fandom’s most scurrilous gossip site, combining amateur investigative reporting with a kind of early warning system against Internet trolls and drama.

Fandom_Wank is 10 years old, and looks it. Hosted on the LiveJournal clone site Journalfen for the past decade, it was previously ejected from Livejournal and Blurty for terms of service violations. The community’s subtitle is “mockity mock mock,” but although each post is written with a healthy dose of schadenfreude, Fandom_Wank provides a useful resource for people in fandom.

With “fandom” being such an all-encompassing term, there isn’t really a single source of news for the entire community. Sherlock fans don’t care about minor dramas and updates from the Pokémon fandom, and vice versa. Fandom_Wank, however, concentrates on stories so bizarre that they offer a kind of car-crash appeal to anyone.

In celebration of its 10th anniversary next week, the community is holding a poll for the biggest “wank all-stars” of the past decade. Competition is fierce, featuring everything from the “Snapewives” who believed they were married to Harry Potter’s Professor Snape on the astral plane, to the infamous case of Msscribe, a compulsive liar who maintained dozens of sockpuppet accounts which were at the center of years of drama and flame wars—including the destruction of an entire fanfic archive, Gryffindor Tower.

The question is, will Fandom_Wank live on beyond the 10 year mark? Its most popular posts have garnered thousands of comments, as well as spawning slang phrases and in-jokes that became part of the fandom lexicon (“what are your thoughts on yaoi”, anyone?).

On the other hand, its LiveJournal-era format may not hold much appeal for a generation of fans used to the changeability of a Tumblr dashboard. Typical Fandom_Wank posts can be anywhere from a single paragraph in length to pages of meticulously researched screencaps and quotes from the latest scandal. In the current climate of GIF-heavy Tumblr fandom, F_W looks dangerously outdated.

While its Journalfen account has 6,000 regular subscribers and countless casual readers from more popular social media sites, most younger fans from the so-called “Tumblr generation” don’t even know that Fandom_Wank exists. An unfortunate development, considering the fact that it’s easier for misinformation and flame wars to spread on Tumblr than it ever was on blogging platforms like Livejournal.

Just last month, we reported on how a seemingly minor misunderstanding between Sherlock and Teen Wolf fans erupted into tens of thousands of enraged Tumblr reblogs and anonymous hate messages. 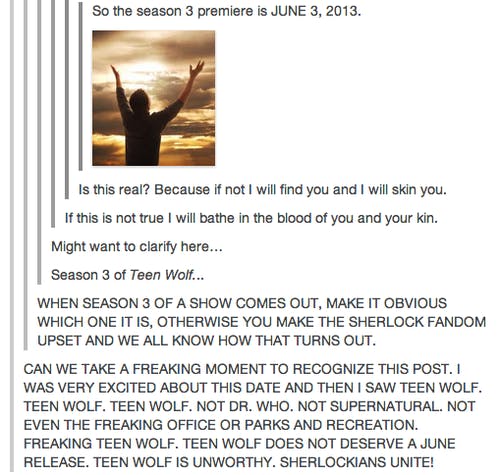 Fandom_Wank’s longevity is down to the fact that no matter how much fan culture changes and grows, there will always be wank. It just remains to be seen whether fandom will be able to develop a F_W equivalent for its new home on Tumblr and Twitter. While accounts like ughsherlockfandom uncover the trolling and infighting taking place within individual communities, the nature of Tumblr makes it difficult to create a centralised, multi-fandom news source.

For evidence of a Tumblr-era scenario where Fandom_Wank has proven its continuing relevance, look no further than the return of Andy Blake. A longtime fandom participant, Blake is better known under his previous pseudonyms Victoria Bitter and Jordan Wood, and is particularly infamous for starting an alleged cult and scamming Lord of the Rings into funding a fake charity. Not just limited to sites like Fandom_Wank, this incident actually ended up being published as a memoir by one of the scheme’s victims: When a Fan Hits the Shit: The Rise and Fall of a Phony Charity.

Recently, posts began popping up on Tumblr alerting fans that Andy Blake was back, this time in Supernatural fandom. Fandom_Wank is the most comprehensive source of information regarding Blake’s history, meaning that a new generation of fans can easily learn about his previous pseudonyms. Gossip and an early warning system, all in one click.