This touching image of a bullfighter who's apparently had a change of heart isn't quite what it seems.

It’s such a touching image: the bullfighter who sits down, overwhelmed at the barbarism of his craft, and the bull who approaches him, as if in supplication. The noble animal is peaceful, even though it’s bleeding from darts and sword jabbed in its spine. 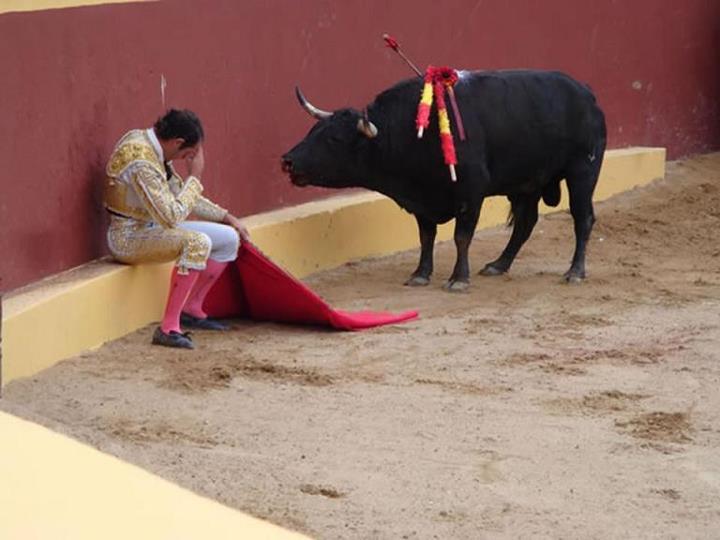 More than 25,000 Facebook users have liked and shared the photo, which comes with this moving caption: “the end of Matador Torero Álvaro Múnera’s career. He collapsed in remorse mid-fight when he realized he was having to prompt this otherwise gentle beast to fight. He went on to become an avid opponent of bullfights.”

Múnera is, indeed, a former matador turned animal rights advocate. But his conversion was far more violent. An aspiring lower-level Colombian bullfighter, he was savagely gored by a bull in 1984. It left him permanently paralyzed.

But what about that pose of regret? Turns out that photo is of a much younger bullfighter, Francisco Javier Sánchez Vara, who’s standing in “desplante”—an act of defiance. Because the bull is so near death, Vara is able to rest in its path with impunity.

Though users’ reactions are mixed on whether it’s an accurate caption, they seem to agree on one thing.

“I am completely against bull fighting, but that is not Alvaro Munera in the picture. This is just an A-hole mocking a dying bull,” wrote Gustavo Carcamo.