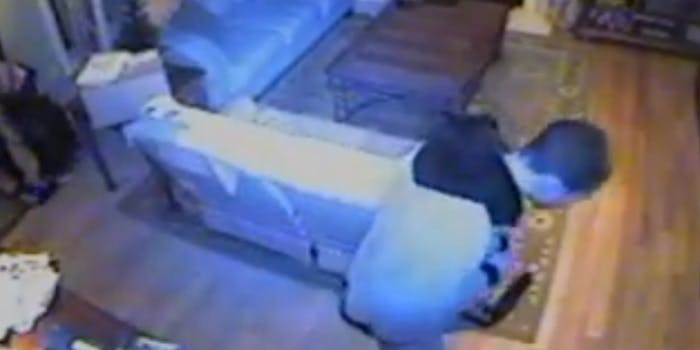 These burglars picked the wrong redditor to rob. Their holiday home invasion was caught on video and is currently going viral.

This past December Reddit user MakingThings lived through a real-life version of the Jodie Foster thriller Panic Room, about a mother who watches her home get ransacked by burglars from surveillance equipment in an isolated room inside her house.

Only instead of being trapped in a panic room, MakingThings was on Christmas vacation watching the burglars on her cell phone.

MakingThings captured the two burglars on camera pilfering $1,500 from her home in Raleigh, North Carolina.

“They kicked in the back door,” MakingThings commented on Reddit. “They took our Xbox. Video games. Wii. A hard drive. Money. ipod. A Roku. A router. ect…They ruined a camera, the DVR, the door, a router, a TV and the bleach ruined some clothes.”

The video shows the burglar carrying objects in and out of the house over the course of 14 minutes. MakingThings’ husband installed the cameras to give the couple peace of mind when they were out of the house. They never realized it would instead give them a look into their worst nightmare.

“It is really disheartening. I am having trouble sleeping and I am so paranoid. At the same time, it is my house that I love. It is a strange feeling,” she wrote. “It really ruined our Christmas vacation. We had to leave early and drive 8 hours home to try and deal with all this.”

While no words can help make up for all MakingThings and her husband have lost, more than 2,000 redditors left comments featuring similar stories and words of encouragement.

“My college house got robbed only two days before this,” stniesen commented. “I know how it feels, and I think violated is the best term for it. All these robbers take advantage of either college students going home or families going to visit someone else for holidays. Fuck all of them. I hope you catch these assholes.”

MakingThings’s case has been picked up by Raleigh TV stations and is currently under investigation.

“We think the more this gets passed around, the better chance someone will know one of them,” she added.